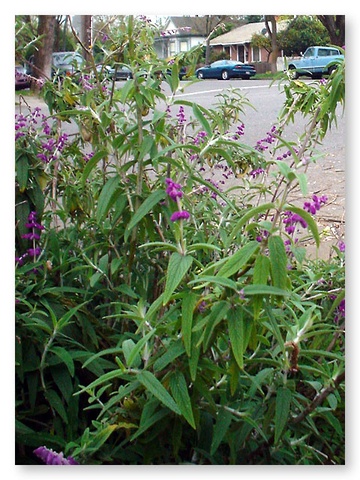 Salvias come in a variety of colors, flower shapes, and leaf forms 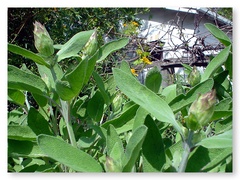 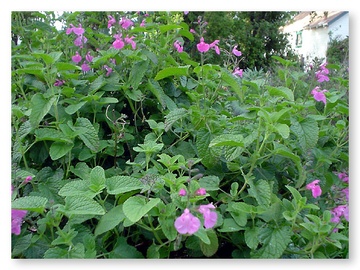 The Sages (Salvia spp.) are a large genus in the mint family (Lamiaceae), including up to 800 species of annuals, perennials, and shrubs, almost twenty of them native to California. The Roman scientist and historian, Pliny the Elder, first coined the name salvia, which translates to 'save' and expresses the many medicinal uses of these plants; its common name originated in England and is believed a corruption of the old French sauge. Salvia flowers are tubular, with two lips, the lower one usually spreading. Flower color can range from whites to reds and blues, and the papery bracts that cup the petals are often equally brightly coloured, sometimes in a contrasting hue, remaining long after the flowers fade. Different species of salvia bloom in different seasons, so you can have color in your garden every month of the year.

In California, salvia are visited by hummingbirds, bumblebees, wasps and Honeybees — hummingbirds will defend the sages in their territory like water in the desert. Native California sages appear along coastal areas, in parts of the Sierra Nevada and into the upper desert. Sages can live for 30 or more years and are very drought tolerant. Generally, annuals are frost sensitive while herbaceous perennial species — those that die back to basal shoots each year — and many shrubby varieties are hardier. Salvias require a sunny temperate climate and well drained soil, and most propagate easily from cuttings.

In addition to ornamental, medicinal and recreational uses, sages are most typically associated with culinary endeavors. Salvia officinalis, or garden sage, is the species that could most appropriately be considered a culinary sage. Surprisingly though, the sage found in the spice aisle of your local grocery store is not S. officinalis, but S. fruticosa (Greek Sage); this twisted looking plant can be grown as an annual, usually reaches about three-feet and has exceptional flavor. Honey made from sage nectar is delicious, with a sharp charactistic flavor that can be distinguished from sweeter honeys.

Historically and traditionally, S. officinalis has always been a potent addition to the human medicinal arsenal. Sage tea is used as a gargle for sore throat and as an aid to digestion. It also contains natural estrogens that may help with some menopausal symptoms such as hot flashes. Many powerful active constituents in sage have been found to have antioxidant properties. As with many herbs, pregnant women should avoid taking sage internally and consult with a doctor before ingesting. Despite these uses, sage should be ingested in moderate amounts— it contains toxic components such as camphor and thujones, which are especially pronounced in the Winter.

Another place to find Salvia is at Dead Zone Novelties on B st. It's considered legal to smoke it, and is described as a "self exploration" drug. Salvia divinorum is sold in different concentrations at the store. The high is generally very intense for about 15 minutes, experiences differ widely.

To learn about other plants which grow well in our Davis climate, visit our Town Flora.

Note the different flower shape of this red specimen