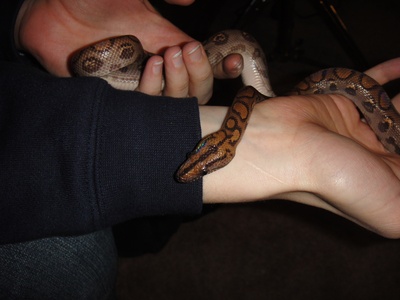 Rainbow boas are called Rainbow Boas because of the unique microscopically rough edges of their scales which act like prisms catching the light and throwing rainbows. This and their bright yellow-red coloration are confusing and mesmerizing to predators. You can see a little of this rainbow effect on his head in the picture above.

Samhain, actually pronounced (Sow-En) or (Sa-Ven) is the Irish word for November. It is also the name of the pagan celebration of death and rebirth that became known as Halloween. Because the snake is himself orange and black, and was named October 31st, DanielleC decided upon the name Samhain. Because the word Samhain looks to Americans like it should be pronounced Sam-hane, and is commonly mispronounced that way, even by people that should know better (which annoys DanielleC), her coven quickly stuck him with the nickname Sam.