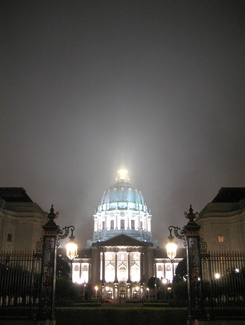 City Hall on a foggy night

San Francisco is a large city some seventy miles from Davis. SF is in many ways the heart of the Bay Area. Many students, tiring of the bucolic existence offered by this town, gaze longingly westward. San Francisco is often called "the City" by residents of Northern California. Calling SF "Frisco" is a high misdemeanor and will result in a hefty fine of $25, payable to the Imperial Treasury. Most folks will figure out what you're talking about, no matter which way you refer to San Francisco. It's a huge place with many different kinds of people.

San Francisco is known for its unique climate; especially in summer, when it has the coldest average temperatures of any major U.S. city, along with frequent fog and wind; thus catching off-guard many a tourist expecting warm California sunshine and thus wearing T-shirts and shorts. But the winters are only slightly cooler than the summers, and frost is a rarity. As a whole, compared to Davis' seasons, San Francisco experiences much cooler summers and somewhat warmer winters.

Where all the cool kids hang out 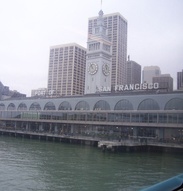 Picture of the Ferry Building at the Port of San Francisco

By train, purchase a ticket from Davis to Emeryville and hop on an Amtrak shuttle bus to get across the Bay Bridge. The shuttle bus is also called the Route 99 Motorcoach Connection, if you're looking at a Capitol Corridor train schedule. It will drop you off in a few places in downtown San Francisco. They are (headed westbound):

Keep in mind that Route 99 doesn't hit up each of those six stops every time — you'll have to check the schedule for details. Each of the bus stops is marked by a sign reading "Amtrak bus stop" so you know you're in the right place. If you don't have a ticket, you'll just need to show an ID to ride. Depending on the time of day you travel, it will probably take 30-45 minutes between Emeryville and San Francisco.

Alternatively, you can also connect to BART via Amtrak at the Richmond station where the train platforms are connected.

Take the Baylink Ferry from Vallejo for a scenic trip to San Francisco.

To get to the city by car, simply follow Interstate 80 west. There are two toll bridges on this path: the Carquinez Bridge and the Bay Bridge. The toll for the Bay Bridge varies throughout the day and over the weekend; with it being $4 before and after rush hour, $6 between 5am-10am and 3pm-7pm, and $5 all day Saturday and Sunday. Fare for the Carquinez Bridge is only collected on the way back towards Davis, the fare being a flat $5. To save a toll on your return trip, take Highway 101 north to Highway 37 east [Vallejo] to connect up with Interstate 80 eastbound. Of course, you'll probably use up the same amount of money in gas, though this alternate route is quite a pleasant drive.

If traffic is heavy on Interstate 80 westbound, exit Highway 37 west in Vallejo or 101 south in Novato — it takes a little longer, but generally has less traffic on weekends. The Golden Gate Bridge toll going into SF is $6. This is a fun route to take tourists on their first trip to the city. It is a more dramatic entrance, plus you can go up into the highlands and take some killer pictures of the city and bridge. Be forewarned however: Highway 37 is one lane each direction, and can get backed up, especially if there is an event at Infineon Raceway just off Highway 37.

One can also drive as far as Martinez and connect to BART at the North Concord/Martinez station just over the Benicia Bridge; a one-way fare to SF starts at $4.60 (North Concord to Embarcadero).

To get to the city on your bike, see the Bicycle Rides page.

The best ways to get around the City are bus/streetcar, Muni, and BART, a superb public transit system by American standards. There are also a lot of taxi cabs available.