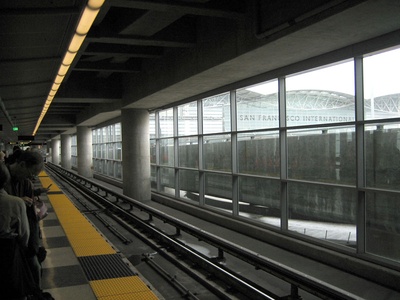 SFO as viewed from the BART terminal

San Francisco International Airport (a.k.a., SFO) is one of the major airports that provides service to people from Davis. While SMF is closer to Davis than SFO, the latter offers many more direct flight destinations.

SFO employs millimeter wave "advanced imaging technology," purportedly for security screening of passengers. These machines, unlike the backscatter x-ray machines used elsewhere, do not use ionizing radiation (a known carcinogen).

Transportation to SFO from Davis

Suggestions about the best and cheapest ways to get there from here (or here to there):

Taxicabs are more price competitive if a larger group is booked and may be more convenient without the picking up or dropping off of other passengers. (SFO is more friendly to taxicabs than the pretentious Sacramento International Airport. There are no required radio tracking devices and charging for drop-offs or pick-ups.)

Catch the BerkBus Shuttle to UC Berkeley. When you get to Berkeley, walk a block or so down/West on University Ave. Catch a left/South onto Shattuck Ave. Get on a BART train heading towards San Francisco. Unless you can catch a ride on a train straight to SFO, plan on waiting for a transfer at the Balboa Station in SF.

Take the yellow line Bart from Walnut Creek to SFO(inside the United Terminal), no transfers required. This trip is usually about an hour.

Walnut Creek is one of the safer & better stations on the BART line.