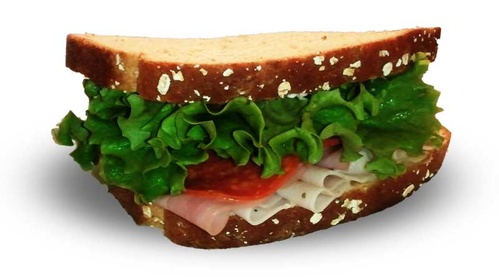 You can also make sandwiches at home. Mmmm... Oatnut bread (and the rest of this example) is available at many Davis grocers

Here are some places to get a sandwich in Davis. Feel free to add your thoughts/favorite sandwich joint. Of course, you can put anything you want in a sandwich; however, some are especially tasty and have fancy names. See Specialty Sandwiches to get the low down.

See also delis and the American section of the Restaurants page for places that serve burgers & other sandwiches.

The Co-Op makes great sandwiches, I used to work there and have made many of them. Quizno's is not that bad either - try the veggie with black olives and guacamole. And the Delta of Venus has a wonderful vegan sandwich which is only $3.50 — CristinaDeptula

The BLTCC on Dutch at Posh Bagel is the best damn sandwich. Plus their rolls are the right size - not too large, not too small, stuffed with good ingredients. I like the food at Delta, but it varies a bit (and I don't like the marinated onions on their sandwiches) — JabberWokky

The California Aggie's Adam Tanguay did a review of the sandwiches in May of 2005, however the online article appears to have been taken down.

2007-03-19 13:47:05   i certainly agree that zia is good, and perhaps consistently the best (if you dont factor in price). However the COHO's grilled eggplant and roasted red pepper sandwich is the best single sandwich in town for the price at $4.30 (since houng lan went out of business) —MattHh

2011-03-30 19:14:13   The BLTCC at Posh Bagel doesn't compare to the BLT at Ciocolat. Though Ciocolat's BLT is somewhat dry—ordering additional spread on it fixes this—Ciocolat's BLT has much more quality and distinctness to its flavors that the Posh Bagel's BLTCC does not. —MichaelFiglock