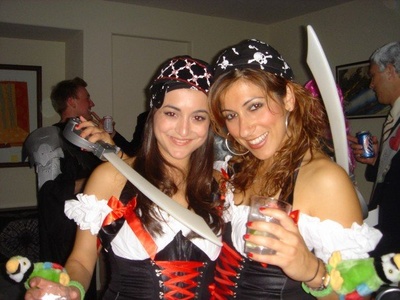 Sara Henry at an October 2006 Halloween Party. Sara is on the right. Sara Henry was the ASUCD President from Winter 2003 - Winter 2004. She was a member of Student Focus. During her term, she helped enact the Student Bill of Rights and spent $30,000 attempting to create a parking shuttle program which ended up failing. Her accomplishments include the creation of two units of ASUCD, both of which were disbanded in the following term. She also endorsed Don Saylor for Davis City Council in a letter to the California Aggie editor. In response Dan Saylor spoke kindly of Sara ""I'm delighted that Sara has taken an active role in the City Council campaign." "She has been an effective voice for students in addressing concerns before the City Council, and I'm proud to have her confidence." Henry sent Senate resolutions in favor of three City Council candidates to the External Affairs Commission which spawned Lamargate. In her farewell speech she stated "I feel it is important to reflect on the services we provide to this campus." Henry also said that during her term she was always willing to support policies that positively affected students and campus life.

As a former ASUCD President she commented that Justice Kris Fricke should remove himself from a Court Case involving his connection to the Choice Voting Amendment. She apparently also tried to remove Kris Fricke from the position of Court Chair alleging that entries in Fricke's online journal proved he was incapable of impartiality in adjudicating court matters. According to Henry, Fricke had discussed pending court matters on the journal and expressed his distaste for certain ASUCD officials. She had also helped Kalen Gallagher win the presidency for the following academic year.

Sara participated heavily in the 2002 Davis City Council campaigns for Stephen Souza and Don Saylor, bringing about ASUCD's endorsement for each, appearing in campaign literature and public events for the campaigns, etc. Once elected Souza and Saylor promptly made permanent the Open Container Ordinance as one of the first acts of the new City Council.

She ran unsuccessfully for President of the Law Students Association, on issues such as naked voting and more fashionable clothing stating: "I want to increase student participation in LSA elections by making the process easier for everyone. As LSA president, I plan to design a website where candidates can campaign & students can vote. Not only would we save paper, but you could vote naked!" She promised to have the "quick problem solving" skills and charisma to get the job done.

Is the fact that she made a comment about me really one of the two most noteworthy things about her presidency? I guess I should take that as a huge complement actually. -KrisFricke

Regarding "immediately" "one year" to "following term," it was changes as soon as possible, ie the next term. It was probably less than a full year and at the very least there's no evidence that it was exactly a year later. -KrisFricke

2007-02-13 13:45:45   On the wiki both of them say they were eliminated during the following budget hearings if I'm reading it right, which would have been a month or two after she left office. —KrisFricke