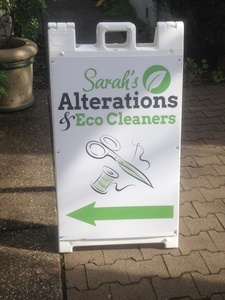 Sarah's Alterations and Eco Cleaners is a quiet little tailor shop tucked away behind The Mustard Seed. It's a little hidden but if you walk around in the complex, you'll find it. Apparently, they also offer cleaning services.

Han's Tailor was previously at this location.

2011-07-02 11:20:42   I thought I'd give Sarah a try after having several good experiences with Han. Unfortunately, she was unprofessional - criticized another tailor's work on a piece that I brought in. That tailor did the work well (in my view) and at a reasonable price. I don't expect the same from this facility. Currently in search of a new Davis tailor. —Kdogs

KDogs I suggest you try sew many things! Daubert

2014-02-10 13:38:55   Do not go to Sarah's. A few months ago I had one dress dry clean at this store since it is quite close to my place. I did not check before I brought it back. After a while when I wanted to wear it, it had a spot which was not cleaned...Since I did not check it carefully when she handed me the dress, I did not bother arguing (obviously a mistake!!!) Last week I brought a NEW WITH TAG $250 silk dress to have its zipper replace and this time when she handed me the dress, I took the lesson of last time and checked and found some part of the dress was torn...I talked about it and she became very defensive and kept saying "You can not blame us because we did not do it"; I asked whether she replaced the zipper or one of her assistant did it, but she did not answer but just repeated the same sentence...I pointed out that the dress is brand new and she became very angry and said I should not bring any clothing to her store next time....I did not want to throw myself into an unreasonable argue and so I just walked away with my broken dress and ended up posting comments in wiki. Hope someone can learn from my experience. —StephanieMai

I have tried the other cleaners and often find wrinkles in the shirts from the way they are pressed. I've never found that at Sarah's. —RMS