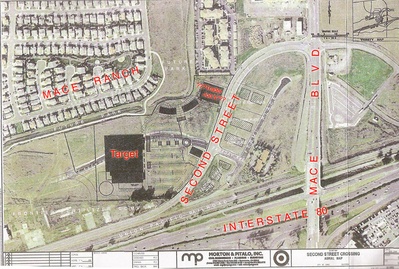 The overview of the area 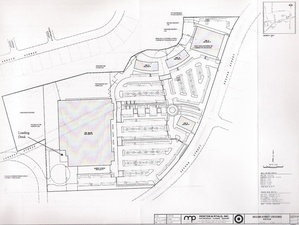 The Parking Lot and whatnot

Second Street Crossing is the name of the shopping center that houses Target and TJ Maxx. It is located on Second Street about a half mile west of Mace Boulevard.

The city's Finance and Budget Commission and the Planning Commission have both rejected the project. The FBC in their analysis did not come to the conclusion that it would be a worthwhile economic benefit to Davis and the PC did not want to amend the General Plan. The Planning Commission also opposed such a development near a residential area, and also feared for the sake of Downtown because there is a lot of retail on the way in Davis that has not been built yet but has been approved. Retail like the Dollar Tree, a retail center on Alhambra Drive, and the proposal of over 200,000 square feet of retail at the abandoned Hunt Wesson Plant was considered.

The city council began public discussion at the June 13 meeting. On June 20 and 27, the council voted 4-1 to approve the proposal, with Sue Greenwald dissenting. The council also agreed 4-1 (Ted Puntillo dissenting) to limit store space that may be used for nontaxable grocery and pharmacy sales to 10% of total floor area each. For final approval, the proposal, known as Ordinance 2259 was passed by the voters in the November 2006 election. It was listed as Measure K on the ballot.

This wiki page looks a lot like the Covell Village page so let's start out with the pros and cons. (Although many of these can already be found at Davis Wish List/Target).