To the northwest of the main part of campus lies the residence hall area of Segundo. It extends to Russell Boulevard to the north, California Avenue to the east, Regan Hall Circle, Beckett Hall Circle, Parking Lot VP 25, and Orchard Road to the south, and La Rue Road to the west (with the exceptions of part of Primero Grove to the Northeast, the old Cowell Student Health Center to the west, and minor parking lots).

During construction, the high rise dorms also received upgrades. They closed for about one year. Regan underwent some construction, but is not in the area of the SSC. Rienda Hall and Campo Hall in the Fall. Segundo dorms are divided up into three regions: 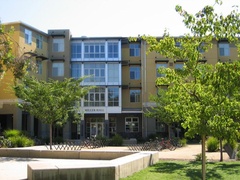 Miller Hall in the summertime. It also possesses what is considered by many to be the best Dining Commons on campus. The Segundo Dining Commons was completed in early summer 2005, and has since served as a destination for residents and upperclassmen from all over campus - especially during the period in which the Tercero Dining Commons was closed during remodeling. That latter incident led to months of crowding in the DC, something Segundo residents are glad is no longer much of an issue.

Drawbacks of Segundo's location include an intermediate distance to most classes, and exterior traffic by its northern side. Benefits range from not having too long of a distance to classes, closest proximity to the Activities and Recreation Center at the Pavilion and the Student Health and Wellness Center. Beautiful grassy lawns line bicycle paths and roads throughout this region, which are often used by sunbathers in the warmer months. The 5th floor of the original four towers are convinced (year after year) that they are the "Penthouse", and that they're somehow unique.