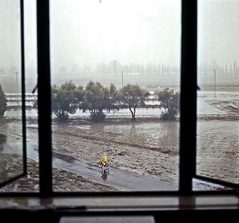 Such make up the High Rises - a Segundo region of tall five story mammoths of residence halls. Four of those floors are used for rooms, with the other being used as a giant common area. In the center of these behemoths used to be the Olde Segundo Dining Commons building. The building was demolished to build the new Segundo Services Center.

It reaches to La Rue Road to the West, Segundo North to the north, Primero Grove, parking lot VP 22, and Regan Hall to the east, and the Segundo Dining Commons to the south.