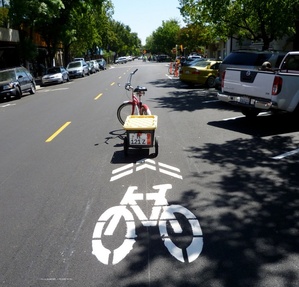 Sharrows are a new downtown Davis street feature that marks the street and alerts cyclists and automobile users that they are sharing the lane. 2nd Street is where the first of these street markings have been painted (as of May 10, 2011).

Under California Vehicle Code Section 21202, cyclists traveling slower than the normal speed of traffic are supposed to remain as close to the right curb as practicable, except under certain circumstances, such as when passing, making a left turn, or avoiding hazards. These markings are intended to guide cyclists into a safe portion of the lane to avoid hazards like opening car doors, vehicles backing out of diagonal parking spaces, and so on, as well as serving as a reminder for motorists.

Davis is yet another home to some of these bike/car sharing indicators, located in the downtown Davis business area. Efforts to educate street users by the city and other local bike advocates are underway. Sharrows are already in use in Australia, Canada, the UK, and elsewhere in the US. The term "sharrow" first popped up in San Francisco, having been coined by Oliver Gajda of the City and County of San Francisco Bicycle Program.