Shasta Drive runs from Arlington Boulevard to Covell Boulevard in West Davis. Where it crosses Covell used to be called Sutter Place, but is now know as David Risling Jr. Court. Several greenbelts running north-south go past (usually under) Shasta. 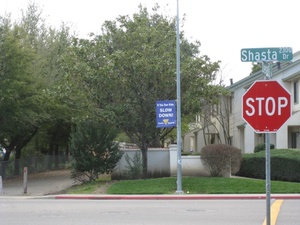 Looking across Shasta from the intersection with Denali. A bike path leads south past Patwin Elementary. No one knows where it ends, although various scholars have suggested it will take you to Mexico, Siberia, or Hawaii. We'll probably never know. 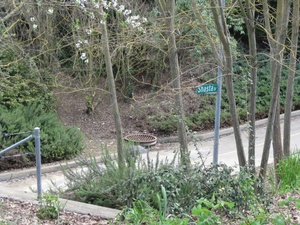 You thought Shasta was a pretty big street. You were wrong. It's itty bitty, as you can see here. 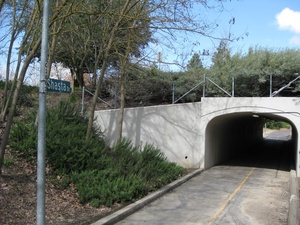 No, really! It's a lot smaller than you'd think! OK, actually, this is the tunnel where Aspen Greenbelt passes underneath Shasta.