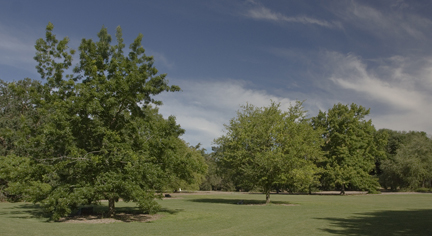 The Shields Oak Grove, established in 1964, is a living library that contains the largest collection of mature oaks in the southwestern United States. It contains 346 trees representing 89 types of oak species, varieties and hybrids, some of which are rare and endangered. The oaks have been collected from around the world since the 1960s. The grove is dedicated to Peter J. Shields, a founder of UC Davis.

Since 2003 the UC Davis Arboretum has received two prestigious federal grants from the Institute of Museum and Library Services to improve the horticultural care of the oak collection. Also, the prestigious North American Plant Collections Consortium has invited the arboretum to partner with other arboreta across the country to build a national collection of oaks.

This fine example of a healthy, mature oak stand is proving very attractive to waterfowl looking for nesting sites. The grove has evolved from a small breeding area for herons in 2000 into one of the largest nesting areas in Yolo County. It is estimated that over 2,400 egrets and herons nested or roosted in Shields Oak Grove in 2005, producing more than 850 chicks.

This intensive avian activity is beginning to strain the grove's resources. The sheer volume of guano from the birds is having a negative impact on soil chemistry, leading to some trees losing their leaves and dying back within the grove. Other similar groves have actually been destroyed in as little as two years from the impact of so many nesting birds.

The birds in questions (the black-crowned night heron, snowy egret, cattle egret and great egret) are all protected by the Migratory Bird Treaty Act, which prohibits any disruptions to the birds during the breeding cycle. These bird groups have been slowly recovering in California after being almost wiped out by plume hunters in the early 1900's. But now the growing populations are facing a habitat shortage, putting places like Shields Oak Grove in a difficult position.

Arboretum workers are taking steps to balance the needs of both the oaks and the birds. Nesting material was thinned in the grove early in Spring 2006 to limit the number of built nests, and the birds will be closely monitored this year to evaluate the impact. In Fall 2006, after the nests are empty, the grove will be culled of about 25 trees which are growing too close together, increasing the overall health of the stand. 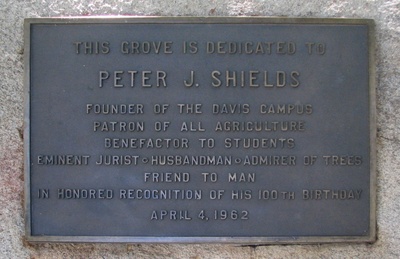