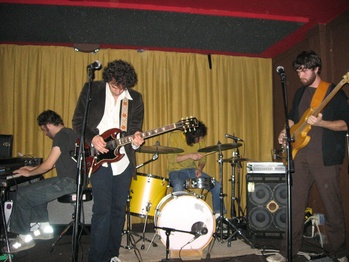 Sholi is Payam Bavafa and Jon Bafus (ChoadBot) on drums and back-up vocals. GregHagel (Legubitron) usually plays with them too, on keyboards and various percussion.

In Spring of 2009, EricRuud (Legubitron, The Zim-Zims) who was on bass and back-up vocals left the band.

In 2008 they were signed to Touch and Go records and toured with Iron and Wine (Sam Bean solo). Their first full-length CD/LP was released on 2/17/09.

In October of 2010, their cover of "It's All Over Now, Baby Blue was included in the Bob Dylan tribute album Subterranean Homesick Blues. The album was released by Reimagine Music and featured in Rolling Stone.

Danny Milks was formerly the bassist; he left the band to focus on the "outdoors and future plans of traveling" in December of 2005.

Go see them. They are good. 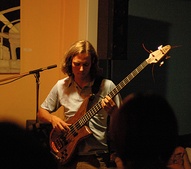 Former bassist Danny Milks on guitar at the delta (05).