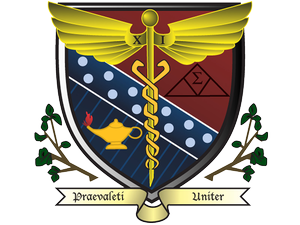 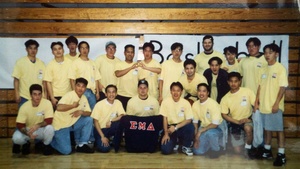 House photo taken during the mid 1990'

Sigma Mu Delta (ΣΜΔ) is a pre-medical fraternity founded at University of California, Davis in 1994, and is the first and only all-male premedical fraternity on campus. Currently, Sigma Mu Delta has chapters at UC Davis, UC Berkeley, and UC Santa Cruz. Membership is not limited to just pre-med students, but also to those pursuing other health care fields.

Sigma Mu Delta was founded by eleven pre-medical undergraduates of the University of California at Davis on February 9, 1994. With the shared goal of forming a bond between pre-medical students on campus and of motivating each other in their pursuit of becoming physicians, the eleven founding fathers created a fraternity that was based upon the principles of Brotherhood, Education, and Dedication.

These ideals were first recognized by three of its founding brothers: Roger Fong, Duc Tran, and Loc Trieu. As they struggled in the process of preparing for the MCAT, a strong bond of friendship was established. Even after the MCAT, their support for one another continued; there was an unselfishness of teaching, learning, and sharing between them. No longer did any of them feel alone in their journey towards medical school.

Soon after, having realized the benefits of sharing knowledge and experience among peers, the three decided to expand their circle of friendship to the eleven young men who would later form Sigma Mu Delta. Their common struggle was the building of a new pre-health fraternity based on those three principles of Brotherhood, Education, and Dedication. Each founding member contributed their time and effort on different tasks to create a foundation for the fraternity. Together they wrote a constitution, a pledge manual, and made specific offices. The founding fathers established the rituals and symbols of the fraternity, and developed the ceremonies of initiation and activation, which were to be carried out during each pledge term thereafter. The eleven founding fathers of Sigma Mu Delta hoped to create a strong foundation for future brothers of the fraternity to rely upon as pledges and actives.

To unify pre-medical students in a brotherhood dedicated to academic excellence. Sigma Mu Delta's foundation is based on the principles of Brotherhood, Education, and Dedication. The Fraternity provides a motivational and inspirational atmosphere to promote maturity.

A number of SMD alumni have gone on to a range of fields including public health, physician assistance, biotechnology, business, law, and teaching. Although collectively accepted to many more schools, below are only listed the health professional schools that alumni have attended or currently attend:

Kappa Gamma Delta is Sigma Mu Delta's sister sorority with whom a wide range of events are held each semester. Kappa Gamma Delta is a pre-health sorority who often participates in events co-sponsored by Sigma Mu Delta including the MCAT Panel with Kaplan, the BiAnnual Fraternity Games, and the Spring Health Fair. Various social events and philanthropies are participated in collaboration with Kappa Gamma Delta Sorority as well. Additionally a lodge at Swarthmore College in Swarthmore, Pennsylvania bears the SMD title.

Sigma Mu Delta is proudly sponsored by The Princeton Review 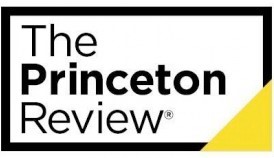