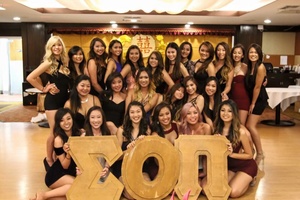 The sisterhood of Sigma Omicron Pi was established at San Francisco State University in 1930 by ten Asian American women pursuing the interest of teaching. They chose the Greek letters, Sigma, Omicron, and Pi to represent themselves as the "Sisters of Pedagogy." The Constitution was derived from an existing "Honorary Society of Education."

The sorority was active in the Asian Community for the next 15 years. At the advent of World War II, the organization was forced to become inactive. In 1946, a group of women from the University of California, Berkeley, re-established Sigma Omicron Pi on their campus. Since its inception, Sigma Omicron Pi has grown in membership with student chapters at:

Though the sorority no longer centered around the interest of teaching, it still maintains its commitment to the Asian American Community. All of the chapters became extremely involved in their respective communities, volunteering their time at community agencies and raising money to donate to favorable charities. Sigma Omicron Pi earned a respectable reputation as a benefactor to the Asian American cause.

The purpose of Sigma Omicron Pi is to promote unity, lifelong friendships, leadership, and community service. This organization offers women a supportive network of sisters to achieve academic and social growth. The sisterhood of Sigma Omicron Pi provides an environment where sisters may utilize and develop their organizational skills.

Each one of our sisters has different interests and aspirations, yet we all share one common ground—Sigma Omicron Pi. We have based our sisterhood on four objectives - UNITY, FRIENDSHIP, LEADERSHIP and SERVICE. In addition, Sigma Omicron Pi has a tradition of lifelong friendship that has prevailed for over 7 decades.

In the fall of 1992, eighteen strong women joined on the UC Davis Campus with a common desire to enrich their college experience. In search of a home away from home, they began the pursuit to become sisters of Sigma Omicron Pi. Through a series of activities centered around the sorority’s four objectives—unity, friendship, leadership and service— they dedicated themselves to their goal of lifelong sisterhood.

On February 6, 1993, the Delta Chapter of Sigma Omicron Pi was established with the initiation of our Charter Class:

Sigma Omicron Pi has grown increasingly active on the UC Davis campus, participating in Asian Pacific Islander orientation, Asian Pacific Culture Week, and Picnic Day. Delta Chapter has also reached out into the community through events such as the annual Pacific Rim Festival in Old Sacramento and volunteering at various charities and services throughout the Sacramento and Yolo Counties.