ΣΦΕ (Sigma Phi Epsilon) is a social Fraternity. It is commonly referred to as SigEp or SPE. 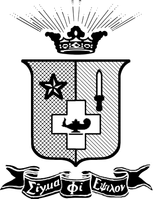 The Crest of Sigma Phi Epsilon Carter Ashton Jenkins was a student at Rutgers University, New Jersey where he was a brother in the Chi Phi Fraternity. When he transferred to Richmond College in the fall of 1900 he sought to establish a local Chapter. The request for a charter was met with refusal because their national office felt that Richmond College was too small (200 students) to support another fraternity. Jenkins and eleven others decided to organize a new fraternity to be called Sigma Phi. The Epsilon was added on at a later date.

Founded in 1901, SigEp has grown to be one of the nation's largest college fraternity with more than 15,000 current graduates in 260 chapters, and over 300,000 lifetime members. Featured in both Time Magazine and on the Today Show, Sigma Phi Epsilon is a fraternity that prides itself on being different. SigEp's are represented on 100 of the top 125 colleges and universities across the United States and was the first Fraternity to charter in all 50 states. 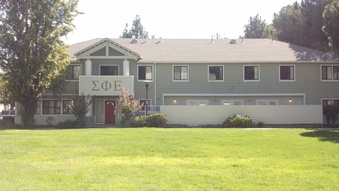 The Former SigEp House. Located at 100 Parkway Circle across from the ARC 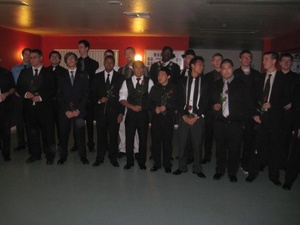 A few SigEp brothers at the Fall 2009 Black & White Cocktail

SigEp was chartered at UC Davis on May 11th, 1963. It was the seventh college in California to receive its charter, giving it the name "California Eta", or "Cal Eta". The UC Davis chapter briefly had its charter revoked by the National Fraternity in 1994.

In 1997 the Davis chapter was recolonized and then officially rechartered in 1999. At its rechartering, the California Eta Chapter adopted the Balanced Man Program rather than the pledge-based system. The Balanced Man Program (BMP) promotes the SigEp founding principles through a program designed to foster the growth of each brother throughout his entire college experience rather than for one quarter without any hazing or pledging. Instead there are three rites of passage: Sigma, Phi, and Epsilon. In 2012, after 3 years inhabiting 500 Parkway Circle, SigEp moved into 100 Parkway Circle. SigEp currently inhabits 310 Parkway Circle. 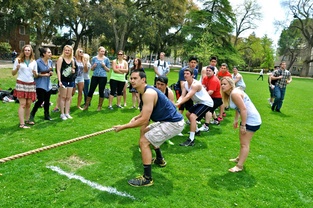 Winners of the Tug-O-War for Greek Week 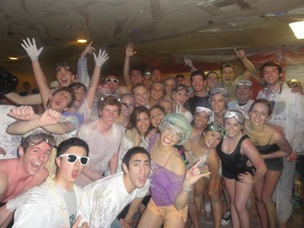 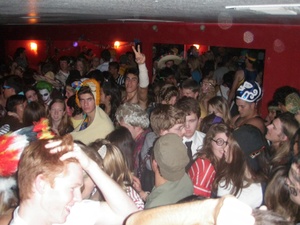 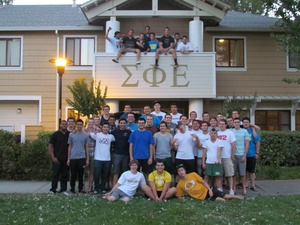 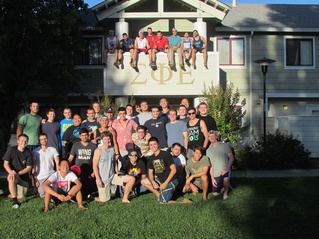 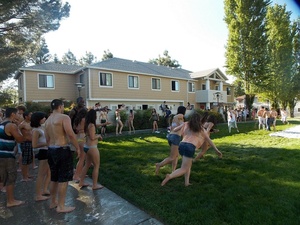 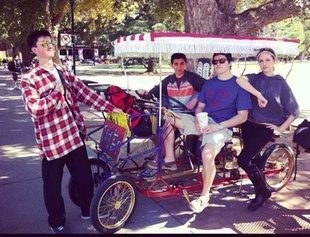 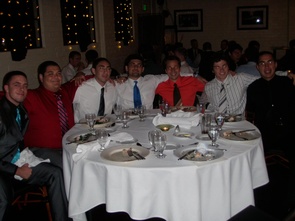 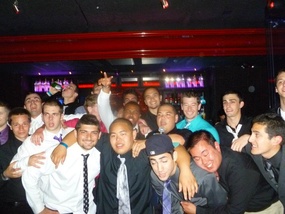 The ancient Greeks believed that a body’s good health was vital as the vessel of the mind. The mind houses your humanity, and, therefore, an exercise of the mind is just as important as the exercise of the body for full maturing and development. The purpose of a human’s time on earth is to live the best, balanced life and to explore the unexamined facets that make us better men.

SigEp chapters use the balanced man ideal of building a sound mind and a sound body to frame their programming ideas. To help develop the Sound Body concept, chapters do not simply participate in intramural sports, but are also encouraged to sponsor annual physicals that measure cholesterol, blood pressure, and screen for different types of cancer. Many chapters have also begun to educate their members on how to prepare healthier meals, which begins by serving healthier meals in the chapter facilities.

To pursue a Sound Mind, we look to grade requirements and study hours as only the beginnings. SigEp takes the next step by inviting political candidates and university professors to speak to the chapter. SigEp promotes greater diversity understanding by inviting historically African American fraternities and sororities to chapter meetings, and by volunteering at the university’s international houses. SigEp chapters are committed to providing an intellectual atmosphere that benefits themselves, their university, and their community, and strives to center on the Balanced Man.

The Sigma Phi Epsilon Educational Foundation is committed to helping develop the Balanced Man, from avenues such as funding every chapter with free subscriptions to Men’s Journal magazine to providing testicular cancer shower cards. Sigma Phi Epsilon continually exhibits its dedication to helping a man develop not just a sound physical body, but moreover a healthy, lasting vessel for the mind. 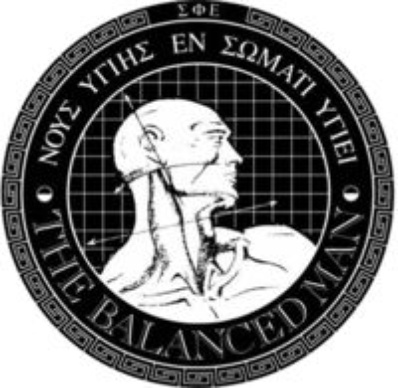 In standing with the notion of a “Universal respect for self and others,” SigEp has eliminated the pledge process completely. The program grants all members the same rights and privileges from day one, which is contrary to the idea of a two-tiered, pledging model. Because we recruit the best men year-round, we can grant them full responsibility as soon as they accept the invitation of membership.

Throughout the four year, single-tiered member development program, the Balanced Man Program builds a bond of lasting friendship that fosters an environment conducive to leadership and academics. Our brotherhood is built through four challenges that evolve through a member’s status in his college career.

Within the Balanced Man Program, SigEps are exposed to leadership, experiential learning, personal development, mentoring, and other positive activities that focus on a core of universal respect and balanced living. Members track their progress through the Quest workbook, which evolves with a member from the day he joins SigEp to the day he graduates. Member expectations are based on experience level in the academic, campus and personal aspects of their lives and link those to the value and ritual of our fraternity.

Why The Balanced Man?

Q: Why did the Fraternity change anyway?

Q: Why is the Journey of Brotherhood idea the basis of the Balanced Man Program?

A: Neither brotherhood nor individuals can develop and flourish overnight or through one brief experience. In addition to strengthening fraternal bonds and developing individuals, continuous experiences are critical for a man to appreciate and understand the values and ideals of the fraternity. Brotherhood is not a destination, but a road to be traveled.

Q: Why should a chapter become a Balanced Man Program chapter?

A: The Balanced Man Program offers many unique opportunities for SigEp’s. The program builds a strong brotherhood by developing individual members and group bonds, and by instilling the notion of “universal respect for self and others.” Implementing the Balanced Man Program provides chapters with many advantages:

The tradition of the red door on Sigma Phi Epsilon Chapter houses began at Syracuse University (New York Alpha) in 1928. This has become a strong tradition and as you travel to other college campuses you will look for the "red door" of Sigma Phi Epsilon where you know you will be welcome. We like to think of it as a hotel in all 50 states. 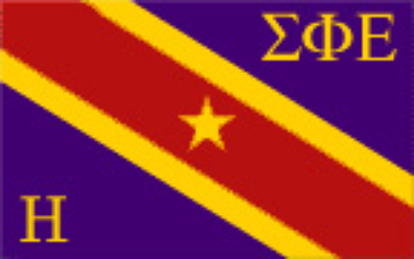 Sigma Phi Epsilon can claim many innovations and achievements in the world of national fraternities. SigEp was first:

The Creed of Sigma Phi Epsilon

I believe in the American college fraternity. I believe in Sigma Phi Epsilon. I believe in this Fraternity because it would have me strive in every way to live up to the high principles for which it stands. These are VIRTUE, DILIGENCE, AND BROTHERLY LOVE.

I believe that the word Virtue is an inclusive term; that it is not enough that I be merely passively virtuous: I must be positive on virtue's behalf. Therefore, I will stand aggressively for honesty in all walks of life, and I will speak cleanly, play cleanly, and live cleanly. Whenever I can, I will oppose lawlessness and vice.

I believe that unless I succeed in being Diligent, I cannot be a good fraternity member. Believing that my fraternity can be no greater than any of its members, I shall strive to make it so high and so worthy that men will consider it an honor and privilege to belong to it and will strive to be admitted to it. I will not offer concessions to an individual to secure his affiliation, for thus making the man more note worthy then the Fraternity and hence only succeeds in lowering it in his estimation as well as mine.

I believe that Brotherly Love must be given in order to be received, and that it cannot exist without triumph of the principles of Virtue and Diligence, for these are essential parts of it. I believe that a man will be made better for having been a member of my Fraternity. I know that I cannot expect the neophyte to be a finished product. Rather I will try to discover whether or not the environment and contact with men of high ideals will make of him a good fraternity man.

I believe that as a good fraternity member I must share a rich kinship of spirit with my brothers. Yet I realize that the members must be men of diversified abilities and talents. Among them are to be found the scholar, the athlete, the builder and craftsman. The good fraternity member must be par excellent in manhood.

I believe I should be generous with the faults of a brother, as I should wish him to be with mine.

SigEp on the Today Show: http://www.sigep.org/video/NBC-Today.wmv

The dudes here are so cool and chill, reminds me of my So Cal bros from San Diego. The guys here are awesome and they are great guys to have a good time with. -MichaelMolnar

SigEps are way savage, and they did a ton of work on the house this year! Every brother had to put in 50 hours of work to clean it up. StevenDaubert

2009-12-22 20:39:28   They got a kickass new house, just as soon as I moved out of the shitty old one, those bastards. I gotta say that the future looks bright for SigEp at UC Davis. A great group of young minds that are going to tear shit up and actually graduate with good grades. Check 'em out. —Scones