Many people have pictures of the Davis skies or may have seen some interesting things flying around. Go ahead and add them!

Skies have lots of weather stuffed into them. They're darker during night time than some cities, due to the city Light Ordinance.

After Sunrise, Before Sunset 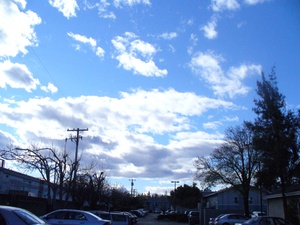 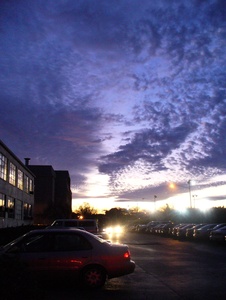 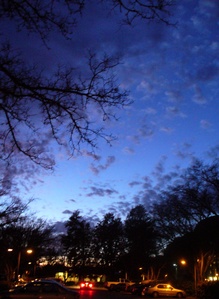 Taken in East Davis looking east at the Alhambra Apartments 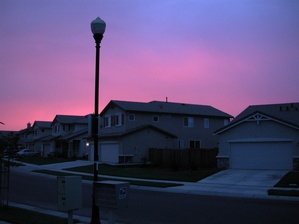 Nighttime is ideal for Stargazing and Space Sightings. 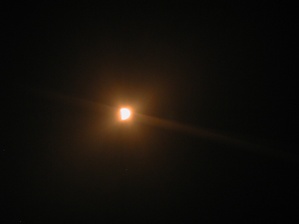 2007-12-18 23:40:07   From now through the end of January, you can get a great view of Mars, directly overhead. Thanks to the Light Ordinance you can see it nicely from in town. It won't be this close to the earth again until 2016. —CovertProfessor

2008-04-09 21:43:35   Davis has too many street lights! Not only do we have too many street lights, we have the worst of the worst light polluters. We were told it was too expensive to retrofit but any new lights would point their light down instead of sideways and up into the sky. Then we built the gasoline friendly, let out teenagers drive to school, parking lot. Those are new lights and they are not night friendly. We are one of the worst light polluters around. West Sacramento has night friendly street lights—about 3 times more that the People's Republic of Davis. I've lived here for 20 years and I never have to use a flashlight to walk my dog at night. However, in the east my bay city of Lafayette, it was so dark in the area I lived in night time walks required a blind man's cane or a flashlight. Anyone else want to see the milky way when they step outside and look up at the sky? Our light polluted skies depress me. I don't have to breathe second hand smoke, we pass laws to limit air pollution, Davis has ordinances that limit noise levels but what about my neighbor's porch lights that shine in my yard, polluting darkness with their second hand light? PEOPLE OF DAVIS, BE POLITICALLY CORRECT AND KEEP YOUR LIGHTS SHINING DOWN IN YOUR OWN YARDS (AND NOT MINE!). CITY OF DAVIS, SAVE ENERGY AND MONEY! TURN OFF EVERY OTHER STREET LIGHT. USE THE MONEY YOU SAVE TO LIGHT THE GROUND AND NOT THE SKY!—Casandra and the Dark Sky Society.