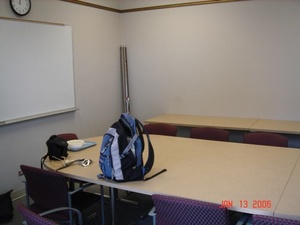 The Sky Room is a meeting room on the Fifth Floor of the Memorial Union. It is rarely seen by students, as access to the fifth floor has been highly restricted. Departments like Campus Unions, the Information Desk, and SPAC use this room for high level meetings. A small room connected to the Sky Room houses much archived paperwork for multiple departments, as well as the controls for the bell tower.

The original reason that the fifth floor was off-limits was because the KDVS antenna could expose people to potentially unsafe levels of RF energy. Since the antenna has since moved to Kerr Hall (and is planned to be moved off campus); this is no longer an issue. The current reason that the top floor is off limits is because of the large amount of equipment that is stored there by Campus Unions Operations and Campus Unions Event Services, like tables, chairs, floor cleaners, flat beds. There is also the liability issue of students falling from the balcony leading to the closure of access to students.

As of 2015, the Sky room is rarely used by any department aside from Campus Recreations and Unions. Even then, it is used almost solely for interviews for career staff and on occasion student staff.

View from the fifth floor

view from the east stairwell

signs in the east stairwell

Coming through the elevator on the 5th floor

bells that are actually speakers we hear all day long

2006-01-23 21:48:47   As an undergrad in the 90's, I used to eat lunch all the time up here on the roof when tables were full up in the Coho. And that was when the antennae was up here cranking out 5000 watts. To close the roof after spending so much to make it even more safe and attractive is messed up. —MattJurach

2006-10-18 01:09:37   Is the Sky Room the ASUCD Gulag? Seems like a sensible location for its theoretical location. Either there, or in the basements of Freeborn. —JosephBleckman

2007-10-25 23:27:44   Anyone have any new information regarding access to the sky deck? Just putting this up so people have a look if they're looking at recent changes. Does anyone have any info or influence on this topic? I'd love to hang out on the roof? —MartySmith

2007-10-26 01:24:29   Newest thing I have is that it's planned to be open in the MU Master Plan as one of the later phases... though there isn't really money for the first phase right now, expanding the Bookstore. —BrentLaabs

2008-08-11 16:08:08   Me and my girlfriend try to get up there all the time, and she managed to get up there one day finally last quarter. She said she hit the 5th floor button on the west elevator and this time the door actually opened up there, but she was too scared to stay up there for too long lol —Juan.Salvador

2010-10-01 11:04:39   The 5th floor doesn't just contains rooms, there is a large open area and what looks like what used to be a coffee shop. Even if they don't want to provide services up here (understandable), they could allow access for study tables or something. It is really awesome up there, I wish they would open it up to everyone. I think the main limitation is the elevators - they are already in use almost all of the time for floors 1-4 - it would be impossible to keep them operating for all 5 floors. If they only had study/eating tables up there, and no food services, then I think it would be manageable. They would have to add an elevator in order to provide any kind of services up there. They would also have to clean up the massive amounts of crap that is being stored up there. We paid for this building, it saddens me (although not surprising in the least) they can just say "no, we are not using a whole floor". PS: Stop taking the elevator from Floor 2 to Floor 1 people. I haven't worked there in like 4 years and it still bugs me. —GarrettGallegos

2010-10-29 09:52:23   I came up here for work once and aside from all the crap that is scattered around the patio it reminded me of an awesome spot for a small dance or other gathering. There was even what looked like a minibar on the east end. As of Summer 09 there's just a couple maintenance duded up there. They've got the best office view of the campus no doubt! If I ran ASUCD i would really look into cleaning it up and hosting small events up there again. It's perfect for it. —ARWENNHOLD