Sloshball is a drinking game. It is played very much like your typical softball or kickball rules but with a few twists: 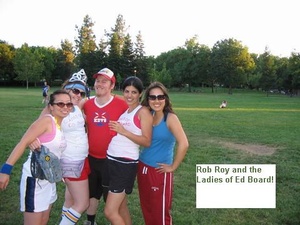 During spring, there are Sloshball games about three times a week at Slide Hill Park. This is probably because open containers are allowed and there is an awesome cement slide.

2005-06-04 02:57:04   This is just a quick little note to let KDVS that they are about to get PWNZER3D by The California Aggie tomorrow. Good luck, folks. That Sudwerk trip was all the energy needed. W00t! —MichaelGiardina

2005-06-06 16:58:00   I think James is saying this in jest. I think the Aggie is a great college newspaper and the best paper in Yolo County. And I, for one, concede that the Aggie won the sloshball game even though I do debate a couple runs they scored. I will also say that the Aggie is a better news source than KDVS. That is because it is not KDVS' speciality. BUT if you divde the product that KDVS provides by how much emplyees are paid and look at the product and do the same thing with the Aggie, lets be honest, dollar for dollar KDVS is better. —RobRoy

2006-02-19 16:38:23   Uh, can anybody say Slip N Sloshball? The name should be pretty self explanatory, but you get a slip n slide for the last leg of the third to home stretch. Set up the SNS so it is at an angle. You don't want to bat in a puddle. I've only found one park in all of Davis that can accomodate it. Suffice it to say you need a spigot near home plate, and about 100 feet of garden hose. It's in an elementary school's field. Any more and I give away our secluded spot. Happy searching! —JeffSpeckles

Email us, or drop us a message in the guestbook, and we'll add you to the list of keggers from across the country.