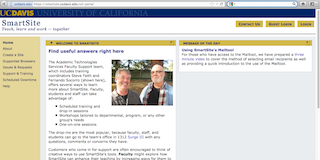 SmartSite is the UC Davis collaboration and course management system powered by Sakai, an open-source software initiative originating at the University of Indiana and the University of Michigan. Now over 150 institutions of higher education are participating. Replacing the more limited set of course management tools once available in the MyUCDavis portal (e.g., GradeBook and QuizBuilder), SmartSite was extensively rolled out in Fall 2007 after a testing period during winter, spring and summer of 2006. An update went live on 2013-12-28.

If you need help or have questions, email [email protected]

SmartSite provides students, instructors, staff, and researchers with two distinct types of sites, "Class Sites" and "Project Sites." Anyone affiliated with the campus, including faculty, staff, and students, can establish a project site.

A Few of the SmartSite Tools

2007-06-19 16:50:11   Anyone have any opinions on SmartSite, either from the professor perspective or the student perspective, as compared to MyUCDavis or in general? —CovertProfessor

2007-06-19 17:02:26   Seems like a much cleaner interface so far. Myucdavis has an issue with clutter, that hasn't strucken me as as much of an issue with SmartSite so far. —JoseBleckman

2007-07-06 21:59:11   I've used Smartsite once as a TA, twice as a prof, and a lab I'm in uses it to share and communicate. It is infinitely better than myucdavis. In particular, it loads quickly, has a good user interface, and has lots of options to explore. The one thing it needs is some personalized preferences. For instance, the grade sheets, by default, list only the first 20 people, and you have to click "show all" every frigging time you access a page. The chat room feature is nice because students can ask quick questions to each other rather than clogging your inbox. The wiki is a great place to answer student questions, and to edit your answers when you realize you forgot something. You can even reuse answers from the last time you taught a class. However, you really need to goad students to contribute to it, and frankly, students have better things to do. I had a 60 person class, and told them that if students contributed 50 questions on the wiki, I'd use a few on the exam. I think we got about 15. Oh, make sure not to overuse it— students won't come to class if you spoil them with electronic copies of assignments, notes, etc. —CraigBrozinsky

2008-06-20 12:24:12   Many settings in SmartSite must be set for each individual student - a very time consuming process when you have a large number of students. It also doesn't seem to provide statistics like my.ucdavis does. Also, it can be very difficult to find specific files, given the way that it is organized. This was a common complaint of students. —IDoNotExist

2008-06-20 12:58:41   The chat room function is a joke. You have to reload the page to check for new messages. Everything is logged, but you can only view either the entire log or just the past 3 days. Each class is cluttered with a bunch of links that often go unused, such as "Drop Box," or redundant links like "section info" and "site info." Gradebook has no statistics, and the main bar of classes doesn't display all current courses. These are just a few of the problems with the site. Overall, SmartSite uses a train wreck of a UI to offer little more than MyUCDavis. This might have been cool in 1990, but in 2008, there's no excuse. Somebody please hire some web 2.0 hotshots to fix this mess. —JonathanLawton

2008-06-20 13:00:58   My only complaint is that the gradebook feature of smartsite does not allowstudents to see data on averages, standard deviations, etc., etc. Since a good deal of classes are curved, some quite heavily, this information can be very important. —JoePomidor

2009-12-02 08:00:40   SmartSite as it is became far far more usable once they correctly integrated it with the CAS. Double log-ins no more! I wish it were not possible to turn off the class wikis. What if I want to indirectly help out other students?? —RyanMikulovsky

2010-06-24 01:48:59   Is the WebDAV thing only for Instructors or can any user do this under their Worksite? I'm having trouble connecting with Windows 7 — I want to be able to drag drop files to a folder in my SmartSite and this should let me do that right? —arinazarian

2010-08-13 01:56:35   As a student who transferred to UC Davis from UC San Diego, I've been consistently surprised by UC Davis' outdated and inadequate computer sites. SISWEB looks like it was designed in the mid-1990s (it's embarrassing). MyUCDavis does too. And SmartSite isn't that much better. Someone should really visit UCSD's "Tritonlink" for some ideas, because we're behind the curve. At ucsd we had EVERYTHING in a consolidated, fresh-looking (modern web design), simple interface called Tritonlink, which is updated frequently to make improvements. —AndrewDay

2011-06-07 23:28:47   I do NOT understand why I have to deal with UC Davis through four different websites (My UCDavis, Smartsite, SISweb, and Gmail and that's not even counting the Timesheets system I had to use when working at the bookstore last summer and the "at your service" website for payroll). In regards to smartsite specifically, there are a number of glitches that are really obnoxious. Say, for example, I'm grading student papers under the Assignments tab. There's a button to return the assignment to the student when you finish putting in the comments and grade— BUT IT DOESN'T WORK. It's there, and you can click it a million times, but it isn't functional. Instead, you have to wait until you are finished with all students before releasing grades and comments. I have also lost long emails in the Mailtool. I'll spend half an hour on an email to my students, and then when I send it I get an error message and the content is lost forever. Those are just a couple examples that spring to mind. Another common problem is when it slows down or stops working altogether - I've been in the middle of a grading marathon and all of a sudden I can't grade anymore because the site is down and I can't download more papers. The slowness seems to happen more often than not, and the outages are always at the worst times (such as grading during finals week when you're under a 72-hour deadline). The upside: I don't have to calculate overall grades manually. —MeggoWaffle

Downside of your upside: Apparently the grade calculations are easy to mess up. I took a class where the professor had to submit a grade change petition because she messed things up in SmartSite. And this was a statistics class, of all things. —WilliamLewis

Well then I guess there is no upside! -Megan

2012-02-28 20:23:56   SmartSite is: unreliable, inflexible, in many ways unintuitive/poorly organized, lacking in essential features, clunky. I say this as someone who is pretty adept at most computer tasks. Good things about it? Ummm... the students are familiar with it? —CovertProfessor

2013-12-24 16:22:17   SmartSite is an embarrassment to UC Davis and perfectly encapsulates UCD's ineptitude when it comes to the internet. Ergo, the supposed "overhaul" over Winter Break is nothing more than a few drop down menus. I always say that they could pay a freshman in the computer science department $100 and they could come up with a better website than this piece of poo. Or, perhaps even a few monkeys who randomly bash the keyboard.

SmartSite is simply that bad. What's worse, there is *no reason* why we even have to use SmartSite; that is, the old myucdavis system was *far* better, but UCD forced this flawed website onto us. Coupled with rampant downtimes, an interface reminiscent of the late 90s, and tech support about as useful as patients at an Alzheimer's clinic, this website alone makes me happy to be graduating this year.

We call it "StupidSite" and "DumbSite" for a reason, folks. —Andy890