I wasn't sure if this was a better include for entries or users. Perhaps we can do both? Also, my explanation of how to root out sockpuppets is a little weak. I'm not sure that we should have an official policy of identifying sockpuppets and deleting their comments because there's no definitive way of saying a particular account is a sockpuppet. —ArlenAbraham

Why do we need an include for this? I agree with not having an "official policy of identifying sockpuppets and deleting". The icon rules, though. I think these sort of includes are largely a form of procrastination. —PhilipNeustrom

I pretty much agree. I will intentionally let some benign sockpuppets go, and stomp on others; I don't really care about the mere fact that they are sockpuppets unless they are actually causing confusion or being used in a deceitful manner. The awesomeness of the icon is seconded, however. I think the community can pretty much approach each account and editor on a person by person basis. I was about to suggest that the icon could be used to flag sockpuppet events, but honestly, just dealing with them and addressing them when they occur seems to be a much much more simple activity. —JabberWokky

Ok, so yeah... basically I just felt like drawing a sock puppet with only vague ideas of how it could be used. Some other ideas:

By Jove, Arlen, I do suspect you've created the site mascot. Or Ma-sock, as the case may be. All hail Sock Puppet, the Emperor of the Wiki. :) — JabberWokky 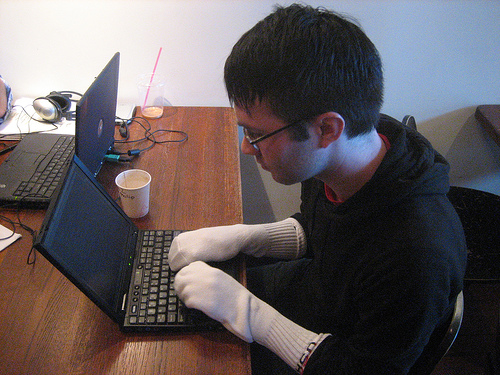 Don't edit with socks. It's kinda hard to type.