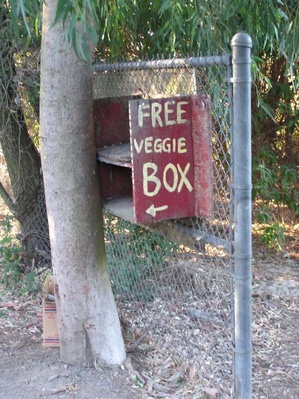 UCD's Solano Park Housing complex maintains a garden just east of the Environmental Horticulture building, between the apartments and the Hyatt Place hotel. By agreeing to the rules and paying the $20 annual fee (and $20 refundable deposit), residents may join the Solano Park Community Garden association and get their own plot. The 15 foot by 50 foot plots have more square footage than any of the apartments. The association provides gardening equipment such as wheelbarrows, shovels, weed trimmers, and a rototiller. Organic fertilizer and mulch is also provided by the University when possible. Joining the association also obligates one to a labor contribution on Garden Work Day (usually the first Saturday following Spring Break, April 5th, 2014). Many residents get to know one another during their time spent in the gardens, adding another layer to the dimension of community in the apartments.

There is usually a surprising abundance of birds at this location including a frequent Red-shouldered Hawk. Mostly you will see birds of the Little Brown Birds assemblage. A flock of turkeys arrived in 2011. There are also rabbits, squirrels, gophers, moles, feral cats, and the occasional snake. There is a little path that goes through the garden, but be sure not to trample on the plants if you come to view the wildlife!

Like the residential area of Solano Park, it can get noisy in the gardens due to its proximity to the Train Tracks and freeway. After living in the area for a while, though, residents get accustomed to the noise. In July, 2012, relocation of the UC Davis loop paved under half the garden. Previously, half the garden was lost to parking for the Hyatt Place Hotel, so the current garden is about a quarter the size it used to be.

2007-12-11 23:22:10   Whose idea was it to trim back so severely the beautiful huge fig trees in the gardens? There used to be a bountiful harvest of free, delicious figs for the taking. Because of the overtrimming, though, there were very few figs to harvest this fall. :( —KendraSmith