In the 1990s a series of overpasses and underpasses were built that connected South Davis to the rest of town for bikers and pedestrians. Though most roads have bike lanes, by instead following the bike paths you can get a much more comfortable ride. For example,when heading downtown or to the university, you can take the Putah Creek Bicycle Undercrossing to avoid the high-speed merging traffic of Interstate 80.

Follow the orange lines on the city map and you will end up on the Davis Bike Loop which uses The Greenbelts. 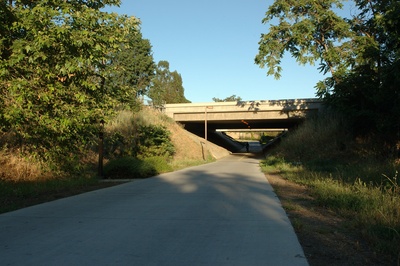 Putah Creek Bicycle Undercrossing, where it crosses under I-80 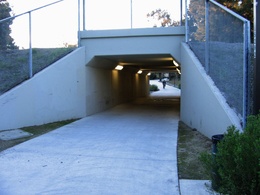 Bike tunnel behind Davis Commons and Whole Foods Market on the path.

W. Chiles Road near the west end of Research Park Drive is the South Davis end of the path.

Wohoo now we can all see what the South Davis Bike path looks like.

A good path for full moon bike rides, as long as you have your lights.

2013-03-24 23:01:29   It took almost nine years (since this page was created) for someone (me) to notice the major error in Davis geography on this page. Yes, Mace Blvd. is in South Davis, but it's way at the far end, miles away from the location of this bike path! (Or at least from the location of the photo on the right which said it was on Mace.) I corrected it with "Research Park Drive." —RussellReagan