This sign is in Woodland, but the distances are the same from Davis.

Percentage of Student Body from some Southern Californian Counties: (source)

Geographically, Southern California can be thought of as several distinct regions:

The San Diego area generally has the best overall weather of Southern CA. It's usually sunny and relatively warm all year. Downtown San Diego is quite nice, and overall, the San Diego sprawl is much more courteous and restrained than the LA sprawl. San Diego still has a lot of Navy/Marine influence in town, and if you spend much time there, it's hard not to notice it. As with many large cities, there are quite a few things to do, but I highly recommend both the zoo and the wild animal park

San Diego represents a wide array of cultures, from bros and SDSU students, UCSD students, surfers and skaters, to hipkids and other fans of the downtown and older parts of town. San Diego has the amenities of a big city (corruption included) with a reasonably small town feel to it (though everything is 15 minutes from everything else). Lots of cool bars and small clubs, good places to see live music, and interesting restaurants everywhere.There is a nude beach called Black Beach.

San Diego County extends from the Mexican border to Carlsbad and Poway, right up to the Camp Pendleton military base just north of Oceanside.

Anything north of Camp Pendleton but south of LA (Orange, San Juan Capistrano, Irvine, etc.) is Orange County, which has a very different feel from San Diego. San Diego is more urban and culturally diverse, though O.C. (which locals never call The OC, though there are indeed several television shows about the area) is becoming so. Quintessential Southern California sprawl tract homes and winding subdivisions can be seen in Orange County, especially in the recently developed Irvine and southern areas of the county. O.C. is also widely known for a surf/skate culture that tends to dominate the youth (and in some cases, the not-so-youthful).

This is often what people think of first when they think of Southern California. It is characterized by massive urban sprawl, smog, lots and lots of stuff to do, and many excellent places to eat. It is also really, really varied. If you spend some time in Santa Monica, some time in Pasadena and some time in Hollywood, you'll have been in three really different towns, but most people lump all three into the "LA" label. The area on the coastal plain between the ocean and downtown LA is usually called the Westside; the Valley usually means the San Fernando Valley but may also mean the San Gabriel Valley. The Valley and the Westside are linked by the dread highway 405.

Generally, LA is a good place to get a job, but also an expensive place to live. Also, the further inland you go, the worse the smog. By the time you get to Riverside, the ocean is a distant memory, and the smog is a constant companion. Housing can be as little as $200,000 for a house (probably less in some areas), to several million dollars for a single half-acre of undeveloped land. It all depends on where you are looking, but basically, expect things to be expensive. Also, expect traffic to be bad, but not as bad as in the Silicon Valley area. Don't expect to bike anywhere. If you do, people will honestly think you are nuts. And they will be right.

LA is the home of the "freeway culture". Other parts of Southern CA may have aspects of it, but LA is its spiritual home. "Who Framed Roger Rabbit" is an entertaining, somewhat fictionalized treatment of the subject.

LA is growing in the general direction of San Diego, it should be noted. Development to the south, however, is heavily restricted by Camp Pendleton. Much growth is occurring to the east and North/Northeast corridors along 215/15 (into Ontario through to Rancho and Fontana) and state route 14 (Palmdale, with LA rail transit into Lancaster).

Most Angelenos do not have a mailing address with "Los Angeles" in it. The Los Angeles urban area is a crazy quilt of neighborhoods and cities. Neighborhoods (e.g. Venice Beach, Northridge, Los Feliz) are part of the City of Los Angeles: you vote for council members on the LA City Council, and you'll get the Los Angeles Fire Department if you call the fire department. Cities (e.g. Santa Monica, El Segundo, Pasadena) are full-fledged cities with their own city councils, fire departments, libraries, etc. Confused? So are most Angelenos, who have become wearily resigned to things like having four library cards (e.g. City of LA, County of LA, City of Santa Monica, UCLA) and never remembering which books are checked out from where. 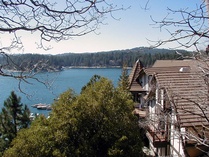 Lake Arrowhead is nestled within the San Bernardino Mountains. The Inland Empire sits roughly southeast of Los Angeles. It is increasingly a bedroom community for LA. Noteworthy towns of more then 100k people include Rancho Cucamonga, Ontario, Claremont, Upland, and Riverside. The San Bernardino Mountains form a geographic wall along the east side of coastal Southern California, and combined with a constant inland breeze from the ocean, this results in soupy smog traveling from its origin in the LA Basin to the base of the mountain range, where it collects squarely on top of the city of San Bernardino. Also, the development of the 57/10 interchange provided for enough blockage to block the smog in the 80's.

The San Bernardino Mountains are capped by both snow (in the winter) and resorts (year-round). Arrowhead, Big Bear and Snow Summit are notable. Intriguingly, when unusually warm winters and a persistent drought hit Arrowhead, there was an outbreak of bark beetles that is currently decimating the Ponderosa Pine forests that cover the mountain; journalists began writing about the tragedy and the decline in the quality of the natural area, and LA homeowners, sensing bargain rates and wistfully reminded of their childhood family trips to the mountains, began buying homes like mad. Housing prices shot up and are now much higher than they were before the forests' blight. Sadly though the death of the forest helped fuel the wildfires of 2003.

To the north and east of the mountain range lies desert, featuring Death Valley in the Mojave Desert. The land is mostly undeveloped, but there are some smaller cities, like Hemet and Palm Springs. It's pretty hot out there. 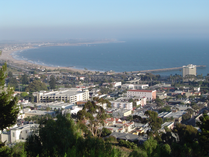 View from the Cross in Ventura North and northwest of LA lies Ventura County; beyond that, Santa Barbara. The Ventura area encompasses Ventura, Oxnard, Camarillo, Thousand Oaks, and several other areas. It has a LOT of good beaches, and plenty of places to surf. Its also generally considered to still be a fairly affordable place to live (although it is getting costly in some areas). Some parts of the Ventura area still have a small-town, laid-back, California-beach-movie feel, but also the area is slowly succumbing to sprawl and big box malls. Also, there are parts of the Ventura area, especially Oxnard, that have quite a gang presence.

North of Ventura, you've got the Santa Barbara area. This extends west of Santa Barbara to Point Concepcion. The shape of the coast at this point is very nearly East-West, causing confusion for people who think of the Pacific as "West" when From Santa Barbara and Goleta out to San Augustine and Concepcion, the ocean is to the south.

Santa Barbara is one of the nicest towns that I've ever been to (disclaimer, I grew up there -ek). It is also insanely expensive. It generally has some of the highest gas prices in the state, and hands down, has the most expensive home prices in the state. Last time I checked, median home prices were about $1 million for a modest tract home. The cost is largely because development is frozen in the area. There is no room to expand, and the locals like it that way. They are very afraid of turning into LA, so they limit growth as much as they can. The mountains on the east side, the ocean on the south, a coastal preserve to the west and north, and a narrow connecting corridor (between cliffs and ocean) to Ventura on the south east side hem Santa Barbara in on all sides. The only development happening in Santa Barbara these days is either redevelopment of old property, or the—very rare—development of old preserved land. As often as not these days, the old preserved land is being bought by land trusts to preserve the land as a natural habitat so that it cannot be developed. Developers who are under intense community pressure often sell land that they had planned to build homes on to these land trusts. The final result is a very nice town that has mostly kept its small town charm, but is also too expensive for most people to live in. Because of this, many middle class families (and jobs) are leaving the area, and the people left are either (a) rich retirees, (b) twenty and thirty somethings willing to live several people to a house, or the odd family that has lived there for decades.

If you can afford to live there, Santa Barbara provides excellent beaches and surfing. It is also a great place for biking, providing lots of flat and mountainous terrain. Oh, and there are a LOT of really good restaurants here, whether you like authentic Mexican, American Mexican, or something that isn't even remotely Mexican.

Note April 2013: this native San Diegan thinks that this whole page is amusingly out of date, has many charming stereotypes that are probably inaccurate, and shows a strong coastal-Los-Angeles/Northern California perception.