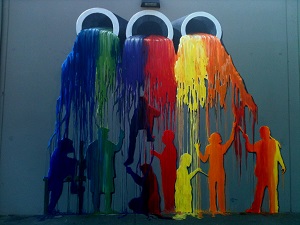 The mural "Splash" was created by Kerry Rowland-Avrech and was part of the Davis Mural Team project for 2012. John Natsoulas and the Davis Mural Team created 10 murals in the downtown section of Davis, and with the assistance of Dr. Monto Kumagai, and a handful of business owners, these murals became part of the Transmedia Art Walk which encompasses sculpture and murals throughout the city.

Her inspiration for the mural was in large part a desire to not create a personal image, but to utilize the artists, paint and color to create a living image for the community. This mural was the second of three murals created by Kerry Rowland-Avrech, although she has been a major collaborative artist in five murals, and restoration artist on two - The Columbus Cafe, by Terry Buckendorf  in the Downtown Davis Area, and I am Quercas  mural in the UC Davis Arboretum. She also assisted in eight of the ten Davis Mural Team murals in 2012.