So, Campus Computer Labs lack staplers. Why not try and put them there yourself? That's the idea behind the Stapler Liberation Front. Contrary to popular belief, the SLF has nothing to do with the Campus Crusade for Chaos and Confusion since that does not officially exist. It was concieved by "Chaos Phoenix", publicized in an email sent to the usual suspects: 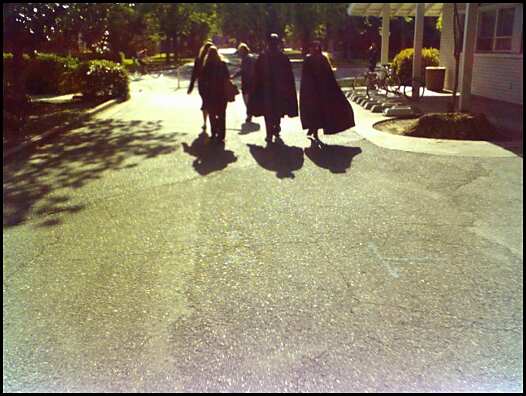 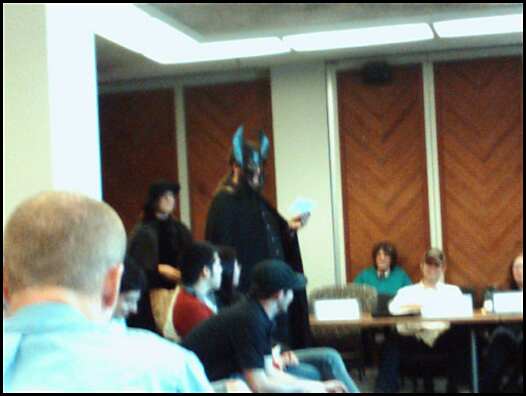 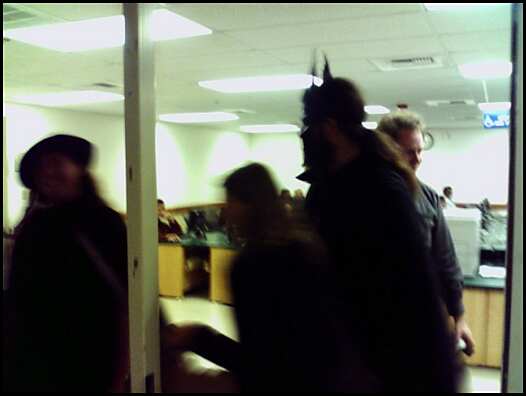 2005-04-18 12:51:47   yea... staple upkeep and replacing them when they inevitably break. also you might want to be careful about barging into 'open access' computer labs to make your message. the open access rooms are sometimes used for classes. and just being disruptive in a computer lab in general can land you in a meeting with the SJA. but i guess that's why you wear masks... lets hope you aren't recognized=p —DcLewis

Actually, my research into the activities of the Crusade indicates that they seem to go out of their way to AVOID disrupting classes. This time, they apparently even skipped a computer lab in Olson altogether just because there was a class taking place in it. Regarding staple refills, the leader reportedly told the Student Senate that now that staplers have been donated, "maintenance, security, and refilling are in your hands." —BarnabasTruman

In case you hadn't noticed...you failed. The staplers were gone immediately following the operation. —GeorgeLewis

I heard that this was because the Campus Lab management took all of the staplers to test them for chemical and biological agents. They are threatening to remove the SLF from the University. The plan didn't work because the campus bureaucracy doesn't want you to be able to staple at computer labs. —BrentLaabs

Clearly the staplers weren't confiscated for testing. They were placed in the lost and found bins were all of the other staplers go that people leave in the labs. —GeorgeLewis

The lost and found bins? Weird. Perhaps the Crusaders should go reclaim their "lost' property so they can give it to the labs once again. —BarnabasTruman

That would be a good idea, however the lost and found bins are emptied at the end of every week, so the items in question are no longer there. They get sent to the UC Davis Police Department

You know, even though the staplers are gone, I'm inclined to think that the Crusaders succeeded. There certainly seems to be a great deal of chaos and confusion about the issue. I mean, confiscating staplers to test them for suspicious substances? SOMEBODY got thrown for a loop here, and it ain't the Crusade. —BarnabasTruman

The rumors are true; I was embedded in the SLF, 1st company, and I saw the operation firsthand. While I cannot comment on the extent of my activities, I must urge the student body to reject any hint of a retreat from the optimism that the SLF has brought to our ailing computer labs and to the students who use them. While the SLF may never win the battle, the fight against the fascist anti-stapler / anti-student policies will not be in vain. The victims of this brutality will not soon forget the compassion of those that dared to do the impossible to alleviate their suffering. A stapler for one is a stapler for all! From the front lines, remember to tend your victory gardens and God bless the SLF! —RobertBaron

2005-04-21 14:07:07   Does the SLF dare enter the maw of Shields computer lab, now that it is designated a 'Stapler-Free Zone', as evidenced by the wallpapering of said informative posted bills? —DanielMedinaCleghorn

Brent, the third picture is from the Hutchinson Lab that a group not affiliated with Campus Crusade for Chaos and Confusion had not entered and had not given a speech nor had they place any stapler in a lab that had nothing to do with computers. —RobertBaron

2005-05-05 13:46:03   I have had resounding success with my efforts in Shields. Wallpapering the lab with signs and highlighting the text has worked wonderfully. Since I put them all up, I have not received a single stapler question. Not even the 'so, you don't have a stapler, huh?'. And again - if this is such a big deal to you, take it up with ASUCD. I tried to help Rob, but I have heard zero progress on anything. And I find it very difficult to believe that a CRC would tell someone that a stapler was stolen, especially when there's a communication taped to a CRC desk in Hutchinson explaining exactly why staplers were decommissioned. Go buy your own stapler for $3. School doesn't provide pens and pencils, so what's the difference. Be self sufficient. —DanielMedinaCleghorn

2005-05-05 21:36:14   I'm guessing that most of what need to be stapled are assignments and papers. Why not turn this around and start a movement to encourage more professors to accept electronic submissions? Surely that is something that R4 Recycling could get on board with, and the various people who support IT in education could help professors with learning how to mark up PDFs instead of paper. —JasonAller

2005-05-09 18:12:24   I like the idea of electronic submission, I think it's something that needs to be taken seriously, despite the fact that profs would rather have a hard copy and that students would probably rather get their papers back and be able to flip through them. The whole idea of the paperless office hasn't really taken off unless you consider PDAs replacing post-it notes and emails replacing memos. As for the CRCs 'sitting on their ass and chatting on AIM', you must not go into the labs in the middle of the day - I assure you nobody is on AIM (it's not even on the computers), and sitting down is less frequent than you'd think, especially in a big lab. Your assumption that it's not a big deal to provide a stapler must be based on ignorance of every argument against putting the staplers in the lab. It obviously was a big enough deal that they had to take them out. Considering the fact that the time the CRCs trying to help people figure out how to print and fix printers and assuage those who can't open docs etc. etc. etc., was being overrun by fixing and refilling staplers, it totally changed the focus of the job. CRCs are supposed to help clients with computer related problems, not poke around inside a stapler trying to unjam it. The money it cost to supply and maintain those staplers was getting out of hand, so they stopped it. No amount of bitching on the wiki pages is going to make money magically appear, and like I said before, I gave Rob info and concerns from CRCs, and nothing's been done. If you want to complain about the lack of staplers, talk to the guy who made it an issue and then dropped it on its ass. He'll blame CLM for not getting back to him, but how many appointments has he made? I find it inconceivable that you can't forgo a beer or a soda or whatever for one day and buy yourself a stapler from the bookstore. School is there to provide you with stuff you may not already have (ARC, computer, printer, etc.), they're not there to hold your hand and tell you when it's naptime. And I fail to see how making a cardboard stapler is sadistic. Sadistic might be putting a stapler out with nothing in it and saying that there are no staplers to use. It's advertisement, designed to catch the eye. Think of it as an informational display. The idea of posting locations of public staplers is a good idea, that's something that deserves to be looked into. Constructive ideas are what's needed to stop a argument, not disparaging comments and uninformed assumptions. If you want to fix this, grab a wrench, don't just bang a hammer for some attention. -DanielMedinaCleghorn

2005-05-13 00:58:16   That's a good idea, kudos for doing your research. I don't know how flexible CLM can be with stuff like donations or working out a deal with OfficeMax, my guess would be that they would have to be entirely self sufficient. However, I'm sure CLM would be more than happy to host staplers in the lab if ASUCD wanted to pay for it, or if they could receive some dedicated funding towards it. The most effective thing I can suggest is run it by a senator and have them make a serious proposal to CLM, and do it thoroughly. Whoever can pull it off gets knighted by the student body. —DanielMedinaCleghorn

I hope this clears it up for you. —BrentLaabs

2005-05-18 15:41:28   I seriously don't see how having a mini stapler will take up oh-so-much space in a student's backpack. Almost 98% of the student population bring cell phones which are bigger than a mini stapler. So they have space for a cell phone but not a stapler? Does not make sense to me. In addition, $2-3 that can be invested for at least one year cannot be compared to a $2-3 investment on food for one meal. Of course, students have to eat, but I highly doubt $2-3 will make that much of a difference. If you can spend that amount on alcohol or going out to party, I'm sure you can use it in a more useful way. Lastly, get a mini stapler and keep it in your backpack. That way, you will NEVER forget it. As for the eco-friendly point, I agree on that. —JennKwan

This staple-less stapler joins your papers by punching a small, neat hole in your documents and folding the remaining flaps together for a secure binding. No paper is torn off of your sheets, and no staples are necessary. 4 or 5 sheets maximum