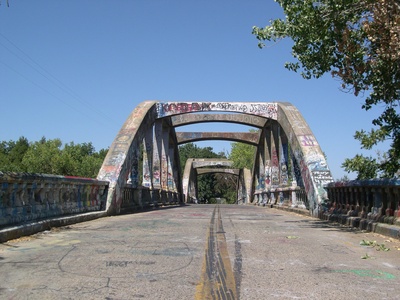 Stevenson Bridge is a local landmark due to its age and unique appearance: it's covered in graffiti. Love messages, insults, and downright creepy messages can be found scrawled across the entire span of bridge. Not a nook is uncovered leaving spectators wondering what the original color of the bridge is.

It spans Putah Creek, which lies about a hundred feet below, at the junction of County Road 95a (Yolo County) and Stevenson Bridge Road (Solano County). To find it, take Russell Blvd. west to County Road 95a, turn left (south), it lies 1200m (4000ft.) ahead.

The bridge is host to fugitive band geeks, bicyclers, people making strange commutes, kids drinking forties, In-N-Out garbage, a trashed car, a ton of old metal scraps, trees, a quiet creek in the summer, a raging creek in the winter, a nice smell (sort of), a good morning walk, a great date, Sheridan & Alexis' love, a cute path, the exhortation to "bike fast", scattered used syringes, dead animal carcasses, a geocache, and a lot of bats at night. The bridge in the morning is a truly magical thing.

The bridge was built in 1923 and has been identified by the state of California as eligible for the National Register of Historic Places. It's one of only three bridges in California that utilizes an architectural design known as the "overhead tie arch." Those concrete arches are part of what makes the bridge so special. Note that this was the same year the streets were first paved — with crushed rock — so the bridge was an impressive feat.

Unfortunately, the age and condition of the bridge have led the state to declare it "structurally deficient" and "functionally obsolete." In 2007, Yolo and Solano counties approved a $5.5 million rehabilitation plan. Construction was expected to begin in 2012 and be completion date is 2013. The rehabilitation could mean the loss of much of the graffiti. The construction, to date, has not happened, and an outpouring of support from the community stopped the city's plan to buff the graffiti. The bridge is still gloriously covered by locals. Google "Davis Graffiti" for videos.

In the early 2010s, a Library in a Box was built on the north end of the span. A nice poem featuring the bridge is aptly named Bridge. Most recently, a Bay area band named Be Calm Honcho made a video for their song, I Love California, http://noisey.vice.com/blog/be-calm-honcho-i-love-california-video-premiere, which was filmed entirely at the Bridge and in the surrounding area.

On the creek's banks lie all sorts of oddities: 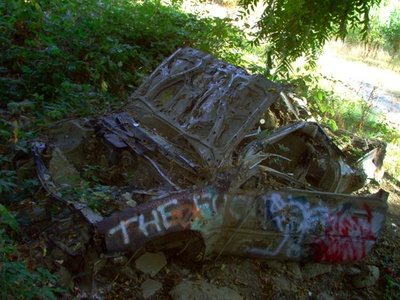 An old, dead, rusted car. Anyone missing a car? 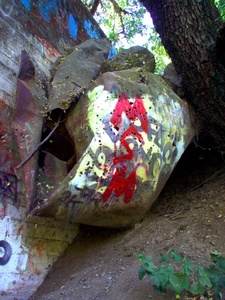 A bunch of weird twisted metal is all over the place. It's all covered in graffiti.

In 2004 a photoshoot for the softcore pornography website suicidegirls.com occurred at the bridge (more details at pornography). 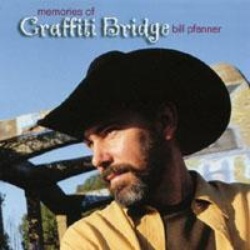 Davis resident Bill Pfanner recorded a CD of original music called "Memories of Graffiti Bridge" with photos of this site. The CD is available from CD BABY and the title song and images can be viewed there or here. 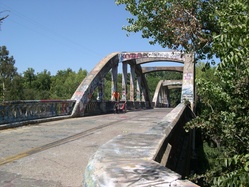 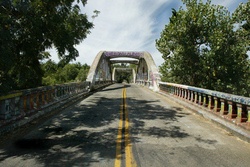 View towards the North 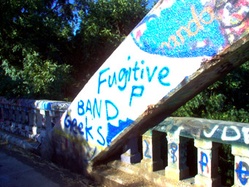 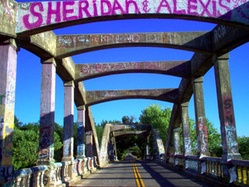 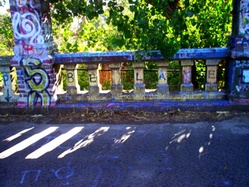 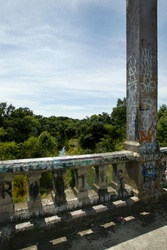 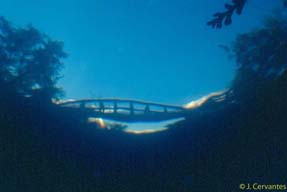 Fishing under the bridge at 2:00 AM is suprisingly fun, and it was my first foray into night fishing. —StevenDaubert

2010-02-17 14:21:44   I hated the Stevenson Bridge band, they were always way better than our awful band (Phoenix). Nice guys though. There sure were a lot of good times on this bridge. I had a birthday party here, I think for my 21st, and drank about six Old English 800s and got sicker than I eve have before or since. The man never seemed to patrol this road. I remember climbing up the arches to paint "Phoenix" across the top one night at about 3 am. What a stupid name. —SteveDold