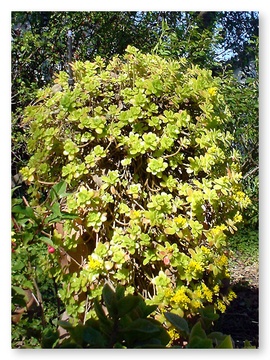 S. makinoi tumbles out of a pot and brightens a semi-shade garden in early spring.

Stonecrop (Sedum L.) is a large genus within the Crassulaceae, or Stonecrop, family. The genus, named by Linnaeus in 1753, contains several hundred species whose members are close relatives of Sempervivum (such as houseleeks) and Echeveria plants. The genus name derives from the Latin term sedere, to sit, exemplified by stonecrop's ability to attach itself to rocks, stone walls, and other areas with very little soil. Most nurseries offer several species, so the typical garden will contain at least a couple sedums in a rocky or dry area. A few species grow to over a foot in height, but most reach only two or three inches and grow in a slowly spreading hummock.

Stonecrops are an herbaceous perennial covering a wide diversity of types and habits ranging from ground cover to upright plants, while yellow, white and shades of pink or red tiny star-shaped blooms typically adorn the plants throughout summer and fall. Leaves can be variegated, purplish, red or various shades of green and blue-greens. Sedums rarely have pest problems and few plants tolerate Davis' dry hot summers as well as these succulents, characterized by fleshy leaves to store the water they need to grow on. Like many drought-tolerant plants, sedums are not typically cold hardy, and most demand temperatures above freezing. Succulents like stonecrop are a natural guard against the wildfires that can rapidly spread in the hot valley summers, and are featured in some local public service announcements on how to combat wildfire.

This sun-loving S. spectabile will begin blooming around March in Davis.

Finally! The same S. spectabile in May. Stonecrops grow in their native range throughout the northern temperate zone and in the mountains of the tropics. They are not susceptible to diseases and few pests, with the exception of

slugs & snails, pay any attention to them. On sunny days in fall, butterflies and bees flock to feed on the nectar-rich flowers, while later in the season, toasty brown seedpods form perfect perches for small birds to peck. Plants are easy to grow and propagate (by stem cuttings, seed or division) — simply snip about six inches off the end of a branch, strip off the lower leaves, and cut the remaining leaves in half; stick the cuttings in damp sandy compost and within a couple of weeks you will have newly rooted sedums. They grow best in full sun and well-drained soils, although some species will do well in part shade and other soil types. The number of species and cultivars available exceeds 600, with new types coming along yearly.