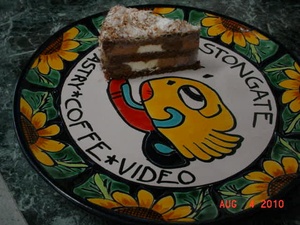 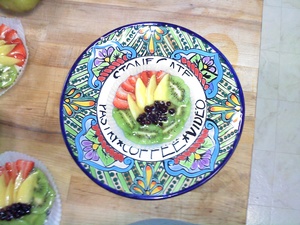 It is one of the only remaining regular video stores in Davis, the other is Four Star Movies. The store is not giant, but they have an extensive collection of DVDs - (8000) titles. They have new releases which Redbox, Netflix, and others don't have available until up to 4 weeks later. When newly released movies first go on sale, Netflix and Redbox are prohibited from renting those movies until 28 days later. This is due to agreements that Netflix and Redbox made with several major movie studios. The minimum DVD rental cost at Stonegate Video is $2.25 4 days rentals.

WiFi is complimentary with a minimum $2 coffee/espresso-pastry purchase. Five computers and printers are available for use for $2 for two hours. Their pre-viewed dvds sell for $7.42+tax. Also their used posters sell from $0.25-$1.00.

They sell a variety of pastries, coffee drinks, pizzas and Panninis as well as soda and candy for those who need energy to study and work. They offer a few tables inside and outside with a lot of soft chairs.

Computer repair is for PC and Apple.

The previous owners had a U.S. postal office contract station, which was convenient for West Davis residents, but it closed down on 2006-06-30. Stonegate Video was under new ownership as of 2007-03-21.

Also worth noting, on occasion they will have a sale of the movie posters they hang in the store. Super cheap, too. Anywhere from 25-75 cents. The posters were all from fairly recent movies (within the past 6 months-year). — StacieTownsend

They have a lunch menu now (Dec. 2007)- croissant sandwiches, panini, pizza, salads- the price range is 5-6 dollars. The coffee shop now seems to be under the ownership of the people who run the video store. —YoohyunOak

2008-02-26 17:10:57   Amazing pastries and cakes, not to mention pizza. Definitely the best choice for bakery items in town. The ingredients are fresh and you can tell the quality is high. Just the right amount of sugar, too. —Lloyd

How do you know that the coffee is house roasted? Do they have a roaster hidden somewhere? I didn't see any signs that said it was house roasted either. If it is house roasted, I guess they own a small roaster somewhere just for this cafe? I'm skeptical since their turnover appears to be way too low to warrant/afford it.

When I visited, the barista was friendly enough and explained that all the pastries were house-made and fresh, which is nice. We had an apple turnover type thing, but it wasn't particularly great. I would suggest Kondetorei for baked goods, even though they are mostly Austrian baked goods. Also, Davis Breads and Desserts has a stand at the Farmer's market and have by far the best and freshest pastries in Davis, when you buy them there they are still warm! —KellyM

2008-04-10 15:40:58   Cloud Forest Cafe is not there anymore, it's a new shop run by the owners. He makes everything, and they're really nice. On Fridays, they run a family movie on their big screen and sell pizza by the slice- a fun family outing idea. —Hilary

2008-07-26 00:36:00   Cloud Forest Cafe has moved to a new location: 222 D street suite #10. The plan is to be open by the first week of August. The micro-roaster has moved with Cloud Forest Cafe along with many new plans for the re-opening. Cloud Forest coffee can still be purchased at Ikedas in south Davis where it is sold by the pound (organic is available). There has been much confusion since the move but yes, Stonegate Video/ Coffee and Cloud Forest Cafe are two different businesses. The phone number for Cloud Forest will remain the same: (530)753-2164. —AlexaTijerino

2009-09-17 16:24:57   best pastries in davis, and best video rentals. the coffee sucks, but I choose to suffer a weak bean than support starbucks or peet's. And it is family run, the husband and wife ownership are in there 16 hrs a day 7 days a week, often with their kids running around. Probably the only establishment in davis which will recieve a positive wiki review from me. Their chocolate croissants are the bomb, and they have computers. —JustinMehlhaff

2009-10-08 21:31:45   I must say the eating was better than expected. It really got me through those first couple of days I moved to West Davis with no way to acquire a real stock of groceries. Good pastries although the coffee they brew is Seattle's Best? I'm pretty sure but would need to check again. Either way in espresso form it wasn't bad. But uh best cafe on Lake for sure. —Patrick.M

"2012-04-03 13:55:20"   I was here on Saturday because I needed a place to get out of the apartment and study. It was quiet and roomy, and I had no problems connecting my laptop to the internet. I enjoyed a coffee and the MOST AMAZING CHOCOLATE CROISSANT EVER. They have coffee and espresso and make all the baked goods right in the store. Goodbye, overcrowded obnoxious Peet's on Covell! I've found my new cafe. Went back on Saturday, 4/7/12 and got a latte and my delicious croissant, but was not able to study. The children were watching cartoons on a television. So, still happy with the pastries, but I may need to find another study spot. —ChollaCat

2012-08-08 16:06:00   Checked this place out for the first time last weekend. Great pastries, decent coffee, friendly service, and decent prices. I doubt I'll be renting many videos any time soon, but it's a nice little place to relax in the morning on a nice day. —TomGarberson

2013-02-16 16:36:36   I kept going to Starbucks by 113 only to find no parking and the place packed. Finally found this spot. Great coffee and pastries. Yes on the chocolate croissant—amazing!! Free Wifi with no annoying codes to enter. Never too crowded. A great little spot. And a huge parking lot with none of the downtown hassle of 90 min. limits to parking. —BrentKago

2013-10-06 11:19:25   My family just had a wonderful time eating the most delicious pastries ever at Stonegate Cafe & Bakery. We biked there and sat at their outdoor tables - a fabulous thing to do on a Sunday morning (before or after church for some). Really, I can't say enough good things about the place.

I just moved from central Davis to west Davis. I'm in grad school here, and always looking for good study spots. This is my second visit and it seems to be great so far. Here are the pros: not nearly as crowded as downtown cafes, both inside and in the parking lot. There are plenty of tables available, most are standard cafe size, but there are a few large ones too. Online right now, internet is working fine, and there doesn't seem to be a limit, unlike at other places. Coffee is good, pastry we had was great, wife's iced coffee good. Coffee reasonably priced ($1.50 for a small, although there are no refills). The owners seem really nice, and it feels good to support a family establishment, and also a Spanish-speaking family. Basically, it seems to offer all of the benefits of a cafe for a student—reasonably priced food, internet access, big tables, a place to study outside of home—without some of the hassle that comes with trying to study at a place downtown like Mishka's. I recommend it!