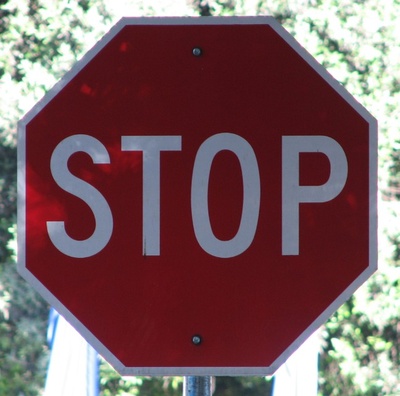 This is what they look like. They are often found near intersections.

There are plenty of Stop Signs in town, but some people just don’t stop.

More information about right of way at intersections, including those controlled by stop signs, can be found in the Handbook.

There is a difference between four-way stops, as seen mostly in down town, and two-way stops as seen bordering down town on more minor streets. There is an even bigger difference in a Cactuar Sign, as those have no jurisdiction over our roads. Some local signs have a secret activist agenda as well.

The Oregon Legislature is currently considering adoption of a law similar to one in Idaho that introduced what’s known today as the Idaho stop, which allows bicyclists to treat stop signs as yield signs. No word yet on if and when California or Davis will consider such a law. However, if it passes in Oregon, it may not be far off.

The stop-clap game would not be possible without the existence of these noble landmarks.

2007-10-10 08:09:20   Someone should note the difference between all way stops, as seen mostly in down town, and the ... not-all-way stops as seen bordering down town on more minor streets. —DavidPoole