The huge straw bale bench was built in 2001 and is located at the train station. It's a great place to study or simply enjoy the outdoors. The bench is a piece of Town Art and was designed by Jonathan Hammond of Indigo Architecture. A 1983 article in Fine Homebuilding featuring Hammond helped spark a popular revival of this long-time building practice. (Early U.S. copyrights for use of strawbales as a building material date to the early 1800s—shortly after the invention of the mechanical baler.) 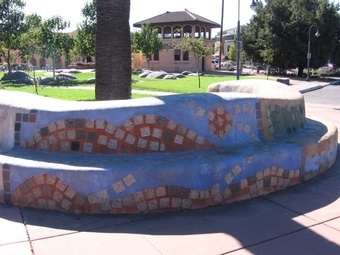 The bench was originally supposed to be about 50 feet to the east, but was moved slightly out of citizen concern that the benches would attract people drinking/drugging due their distance from the station and relative isolation. The bench remained relatively clean and free of such activities for about the first six years of its existence. In about 2007, some say a new "breed" of homeless alcoholics came to Davis to supplement the long-time "locals," and other ne'er-do-wells began hanging out here. About this time, some people nicknamed the bench "The Bunker" due to the ne'er-do-wells' tendency to crouch down and hide on the railroad side of them when Davis Police would patrol the adjacent parking lot. The vagrants were hiding, of course, lest they be discovered drinking. Some of these folks were also supposedly hiding stolen bicycles here and dismantling them on the site.

The newer vagrants are reported to have not gotten along well with long-time Davis homeless, who tended to avoid them. The new folks reportedly do/did not pick up after themselves, leaving a large quantity of litter in the bench area. They have also been observed to leave trash around the bushes located across the tracks along the Calori property, in the east corner of the Davis Wye, and along the railroad side of 203 J St. and 210 I St. There, they also sometimes camp or rest. Some of the Amtrak crews have nicknamed this rotating cast of people The Davis Mensa Society (DMS). Some of the DMS are said to have had medium-sized dogs which appeared to be pit bull mixes. There was an incident in 2009 in which a passenger got off a train and one dog lunged at him, though this needs to be verified. In another reported incident, a bicycle officer was bitten. The dog was taken from its owner but later returned. In addition to their general unpredictability, the DMS allegedly tended to give loud greetings and were supposedly very rude and/or aggressive if not given responses.

There are mixed reports on whether the police can cite the DMS and others for loitering and drinking here. There are supposedly anti-public drinking laws and/or a statute which allow(s) removal of persons not holding tickets at the station, but this is unverified. For long periods, the DMS has supposedly overwhelmed police resources. As of December 2010, for reasons unknown, the DMS are said to have been largely absent from the Strawbale Bench.

It is alleged that the seating indentations are sometimes used as vagrants' urinals.

At one time, it is rumored, many of the platform lights near the benches were busted out one by one, though the powers that be are said to have replaced them so the platform did not fall into total darkness. 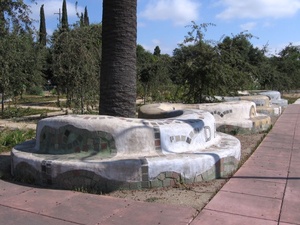 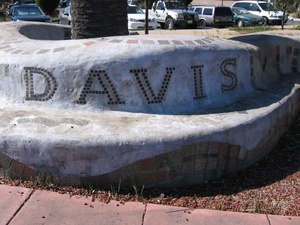 I love this bench! —JackHaskel

I thought this bench looked more strawish. When I went to the amtrak station last Friday, I couldn't find anything that resembled a straw bale bench. Now I know what to look for. — JenniferChu

2011-08-30 03:14:40   What is this article about? Over 80% of this article pertains to local homeless and their antics. Could this page be renamed "Domestic Refugee Sanctuary Scuttlebutt"? I believe that is a more proper and accurate description for this page.

2011-09-02 03:40:08   Regarding the previous comment, the name of the page is of something more permanent than the more transient people. It's interesting what has gone on there, especially since I had a personal taste of it. Something more pleasing could possibly be written here. —BruceHansen