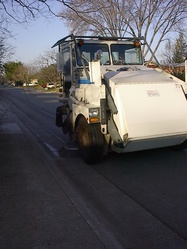 Well they comb the streets of Davis with pulsating bristles and a tank full of water. They have a pretty tight turning radius because the back wheel has some kinda gimbal. They are pretty damn tall, and they make there home behind DWR and they are usually white / blue.

StevenDaubert says that once when he was young a street sweeper broke down in front of his house and it was grand, he got to talk the rather cheerful DWR guy who got a break while they figured out what to do with it. It should be noted that they have the "keys" to the fire hydrants around the city, as thats how they refill the tank.