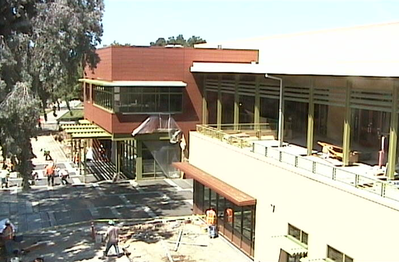 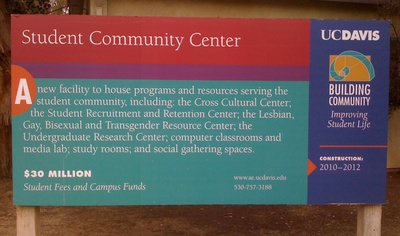 The Student Community Center, one of the buildings on campus, opened on January, 9 2012 and is the new home for the following centers:

Students voted to assess themselves a fee of $13.00/quarter in order to build the Student Community Center. During the planning phase and early construction, it was known as the Student Resource Center.

The building was originally planned to have basic LEED certification. In 2006, CalPIRG and the California Student Sustainability Coalition campaigned to have the building built to LEED Platinum certification. The campaign collected 1,200 petitions. They also wrote an ASUCD Senate resolution (SR11 in Winter 2006), which passed unanimously. Eventually, they convinced the administration to build a LEED Platinum SRC, though funding and a number of other road blocks caused the project to fall one certification level short and is now seeking LEED Gold status.

2012-01-10 08:58:40   It's pretty nice inside, wish I had remembered my camera and had time to take some more notes. There is a staffed information desk when you walk in from the main South entrance. Guess I'll have to go back. —AlexMandel

2012-05-09 00:29:35   The CoHo here could be better. Last quarter they consistently opened 10-15 minutes late, wasn't "set up" to punch my CoHo card (is a hole punch THAT technologically advanced?), and possibly got the dark/decaf roasts mixed up as I fell asleep fifteen minutes after drinking the "dark" French roast and sometimes felt super-wired.

2012-05-13 17:10:54   I feel that having this building built is a great investment, even though my tuition went up because of this...But hey, what am I going to do. That' why I go here a lot. I mean the library is always full and doesn't have a lot of plugs for laptops unlike the S.C.C. where there are plugs nearly EVERYWHERE! There's a whole bunch of centers in this place too, can't remember them all but I do remember going to the Undergraduate Research center and they helped me find a professor to do research for. There's A.C. when it's ridiculously hot outside and keeps you nice and dry when it's raining outside. They close pretty late and they have the study lounge open for quite a while too. Great place to go other than the library or the 24 to study or just to hang out with friends. I can't believe they let us eat in there, I always feel bad but it's great to know I can go inside one of these buildings to eat, hang out and study all at the same time. —JaceWinter