A lot can be said about the Students for an Orwellian Society. It seems that they started off as a group of friends dedicated to having fun putting up flyers around campus, but their prominence and effect on Campus life was magnified due to more aggressive (and some say unfair) flyering and an effort to run for ASUCD Senate under the SOSSS slate in Fall 04'. There was a brief period during Spring 2012 were a new group of students (Led by future ASUCD Vice President Maxwell Kappes) formed a New Students for an Orwellian Society, but it didn't last long.

Students for an Orwellian Society is a nationwide student organization, founded at Columbia University in October of 2001 by Michael Castleman. The UC Davis chapter was formed by MiniTrue Chad Van Schoelandt, MiniPlenty Marie Huynh, MiniLuv Brent Laabs, and some minions in the spring of 2003. Around this time, the United States, under the leadership of George W. Bush, began the invasion of Iraq that some felt was unjust. More importantly, some people felt that Bush's rhetoric about the war was essentially newspeak. This created a receptive atmosphere for the over-the-top flyers that Students for an Orwellian Society put out. Many students found comfort and humor in the flyers that began popping up all over Campus.

The flyers seem to be the primary outlet for the Orwellians to express themselves. The Orwellian's flyers use George Orwell's 1984 as a satirical tool to evoke, provoke, and generally express a message to students. The Orwellians are trying to paint things (such as national issues or campus matters) as absurd by contrasting them with George Orwell's language. In 1984, George Orwell tells a story of a totalitarian society controlled by a universal, all-encompassing government which pacifies its people (mainly) by lies spun as truth. The Orwellians mission seems to be to point out these same outrageous elements in our own society.

The flyers, in early 2003, mainly focused on national issues such as gay marriage, the Iraq war, and Presidential candidates. Some of the flyers also targeted Campus issues, such as the ASUCD installing a telescreen in the MU to show advertisements.

Some people collect Orwellian flyers. This picture was taken at a dance party.

People with orange walls are more likely to collect propaganda. It is a proven fact. Especially oranges walls of dance houses. Orange is Politically Subversive.

As the Orwellians grew, so did the scope of issues taken on in their flyers. ASUCD and other Campus matters are now regularly featured in Orwellian flyers. This was especially prevalent as a group (Chad Van Schoelandt, Marie Huynh, and Chris Rood) of their members pursued seats on the ASUCD Senate under the new slate, SOSSS. Their strategy worked beautifully but were about 40 votes short of getting a seat.

The funny part is that they're actually probably the best people for the job. - PhilipNeustrom

Some say that the Orwellians are unfair in their flyering practices, placing flyers over bulletin boards such that they cover the entire board leaving no other flyers visible. While the Orwellians occasionally do cover entire boards with their flyers, they are not in violation of SPAC posting rules regarding bulletin board postings. The official SPAC policy (taken from their policy page) is that:

1. Only one notice per event/activity per bulletin board is allowed.

The Orwellians have never posted the same flyer more than once on the same board — instead they fill the board with a bunch of different flyers.

Some believe that while the Orwellians may have not broken rule #1, they might be breaking rule #5, "Organizations or persons posting or exhibiting materials in a language other than English must file a translated copy of the materials with Student Programs and Activities Center." However, newspeak is not necessarily not English. It can be considered a dialect of English, which would mean that rule #5 is not being broken.

Orwellians are semi (but not really) intellectuals who would have nothing else going for them if they couldn't ride the same ridiculous joke all day long. If you ask them what their stance is, they will pucker up their faces, be as cute as possible, and say: "tee-hee-hee-hee". They are not qualified in any political position. Maybe they should go do advertisement or public relations. But even then, they're going to have to be a lot more original/creative than they have been.

Are these guys for real?

There have been a few California Aggie articles regarding the Orwellians. The first was this article, which focused on what Sheri Atkinson, director of the UCD Lesbian, Gay, Bisexual and Transgender Resource Center, called a "hostile climate for students" that was created by the flyers (referring to the flyers on gay marriage). The Orwellian flyers regarding these issues are clearly satirical. However, when asked about their flyers and their organization, the Orwellians respond in newspeak. The Orwellians believe that the way to respond to (serious) questions about their intentions is to respond in newspeak-esque language, advocating the opposite of what they seem to believe. 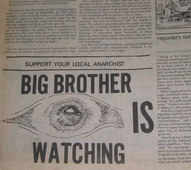 An Orwellian-esque ad placed in the Dec. 17th 1980 California Aggie.

The California Aggie's newsroom has a couple of the funnier Orwellian flyers posted on the walls.

2006-03-24 23:00:03   Aside from the mild entertainment I get from reading the flyers while waiting for class, I've never really taken the group seriously... —SunjeetBaadkar