Surveillance cameras are pervasive in many areas and Davis is not an exception. In reading this page, you will appreciate that there are some cameras probably appropriately deployed for security, as at ATMs and on the bus that was vandalized. Some are meant to protect property or against theft— e.g. Target. But some are just offensive and obtrusive. Whatever your position on surveillance cameras, this page at least is a testament to their raising some concern and people deserve to know of their presence.

As an example of obnoxious obtrusiveness, please consider surveillance cameras in public establishments. They are put there to mitigate against theft. A store with a camera believes you may steal from them. A restaurant with a camera believes there may be theft of supplies, money from a register, or alcohol from a bar (or rarely some incident such as an overly aggressive argument). So then why does Village Pizza and Grill have surveillance cameras on all of their tables!? We asked an employee and he said that possibly the owner doesn't trust his staff and places the camera so as to be able to see staff near the cash register. Interesting, then, that there are cameras in the small rooms of the restaurant far away from the register. These cameras are watching you, eating. Is that cool with you? When you look, you will see cameras in all major grocery stores and at many restaurants, watching you eat. At minimum these establishments might consider notifying patrons in writing that they're under surveillance. Perhaps they could also submit their justification? For fun, ask the manager next time you see a camera why and how. You're not going to get a lot of straight answers.

A growing list of commercial establishments with surveillance cameras:

I spoke with a former mayor of Davis, and he said that he knows that there are six cameras around the city of Davis. The only one he knew about watches the Richards Underpass tunnel for flooding. He said he would get back to me about the rest. But this should be a page for finding cameras on and off-campus. There are a zillion at the intersections around town, sometimes 5 or more. See also Red light cameras. 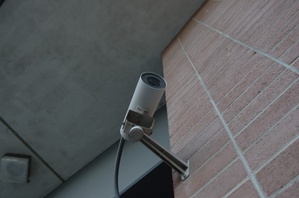 The camera outside of the Freeborn Hall ticket office. 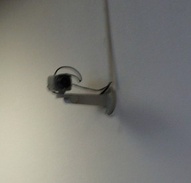