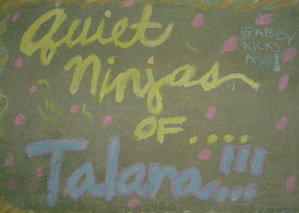 Talara Hall is a part of the Regan Residence Halls in Segundo.

Like many of the Regan Residence Halls Talara was themed the "Quiet Dorm" with quiet hours beginning at an earlier time than other buildings, but it is rumored that it changed to a non-themed community in the 2011-2012 academic year due to Bradley Bottoms (known extrovert) being assigned to Talara.

Note to prospective students - the quiet dorm, at least when I was there (1998), was basically a joke, as half the students in the dorm were there because their parents forced them, and they had no actual interest in being quiet (I would assume similar applies to some of the other theme dorms). We were regularly serenaded by people drunkenly singing The Star Spangled Banner in the shower at 3:00AM, just like any other dorm. I suppose the effectiveness of the theme dorms depends largely on the effectiveness of the RA, but doing it over again, I wouldn't bother with the quiet dorm. -JessicaLuedtke

During this year, the first two floors were co-ed, but the third floor was an all female floor. The first and third floors have girl's bathrooms while the boy's bathroom is located on the second floor. The first floor bathroom had a mysterious puddle that would occasionally appear, which caused a bit of confusion and chaos at times. It would even migrate across the floor... Many of the “third-floorians” were elusive, only being spotted in the first floor lounge a few times. This lead to the rumor that the third floor was a “scary version of Narnia.” It was later discovered that the third floor did not house scary people, rather the first and second floors were at fault because no one ventured to the third floor as they were too lazy.

The lounge, located on the first floor, was the hub of all activity in the dorm. Several students entertained themselves with marathon games of Settlers of Catan, Egyptian war, Risk, Arkham Horror and Illuminati. Contrary to popular belief, these games were not their only source of entertainment—Doctor Who was their other source. There were massive Doctor Who viewings in the Talara lounge (briefly referred to as the “TALARIS” by those versed in Doctor Who slang), which could attract up to twenty freshmen in one evening. Between late-September and mid-February, these students watched 6 seasons of Doctor Who. Many Talarians caught the Doctor Who epidemic however, there were several who resisted for the entire year. Game of Thrones became another popular show in Talara, however it was not known to attract the same sized crowds as Doctor Who. Not only was the lounge a spot for games, TV, wiki races and studying, it was also the place where several birthday parties were held. A birthday party usually consisted of cake and other inexpensive foods that starving college kids will eat (which is practically anything, except the failed coconut cake which looked like apple sauce and was absolutely disgusting). On the evening of April 13, 2012, the lounge also housed a gigantic blanket fort for a few hours which nearly filled the entire room. It was dismantled before the RAs on call made their rounds.

Throughout the course of the year, many elegant drawings appeared on whiteboards, and the hall poster was a masterpiece of a weeping angel (though many did not see it). Another time, chalk drawings sprung up on the walkways outside of Talara. Eventually this turned into a dorm bonding chalk drawing day. The RAs even had a painting event and then turned the lounge into a gallery of fine art painted in under an hour.

Many quirky things could be spotted in Talara. A pair of glasses had a permanent home in the lounge for the entire year. No one knew who they belonged to. Some of the walls sported murals of subjects such as flowers, Calvin and Hobbes, a whale, strange fruit creatures and two pandas (referred to by some as Bamboo and Clyde). During Thanksgiving break, many paper signs appeared around the entire dorm (intended to be a joke on the one resident who was staying in the halls during break). There was even a giant squid to keep her company named La Fleur. Spring quarter not only brought sunshine and outside study time to Talarians, it also sprouted a mysterious handicapped sign in front of the bike parking area. As suddenly as it arrived, the little stick-figure in a wheelchair sign soon disappeared. Finally, it is said that there are several copies of the same letter hidden around Talara from one of the residents from 2011-2012 to the Talara residents of 2012-2013. However, cleaning staff may have found them and disposed of them.

Indio was Talara's main rival. There were several ultimate frisbee matches to determine which dorm was dominant. Even eating at the dining commons became a competition. Whichever dorm had more people eating together for dinner won. Some Talarians brainstormed pranks to pull on Indio. However, between the time of the creation of the plans and the date on which they were to be perpetrated, Talara and Indio lessened their rivalry and became friends. Moral of the story: Don't make friends.

The title of “Honorary Talarian” is a term that is not applied lightly to every visitor who steps into the magnificent dorm. There is no exact formula for determining an Honorary Talarian, but it has been noted that if a student spends more time in Talara than in their own dorm, they are an Honorary Talarian. This title was officially bestowed when an RA would add the Honorary Talarian to the Talara 2011-2012 facebook page.