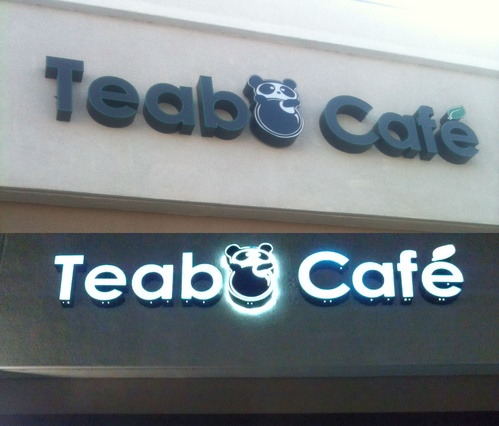 Teabo Café is a tapioca drink restaurant, the first such establishment to open in South Davis. It is in Oakshade Town Center where Quiznos used to be. In addition to boba or pearl tea drinks and other drinks, it serves snacks. The cute little Teabo panda can be seen multiple times in the store, in chalk and plush variants.

"Teabo Café is a new and independent boba milk tea shop serving the South Davis area. They make everything fresh, and their drinks are made with real tea leaves and real milk." 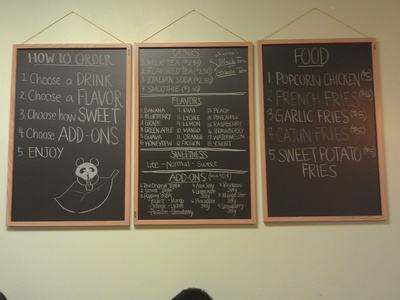 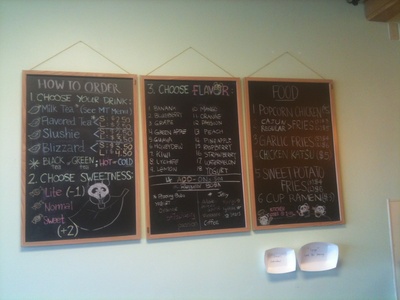 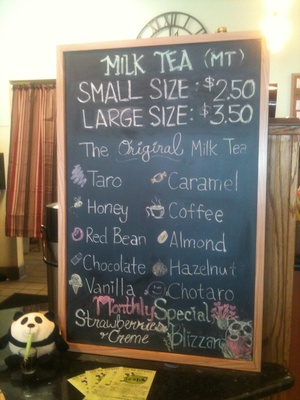 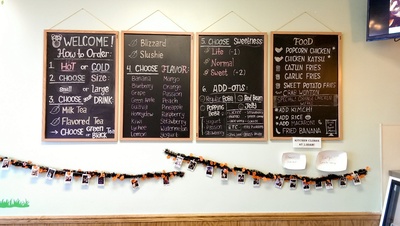 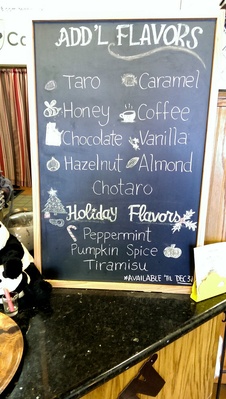 2012-12-17 22:56   We were so excited to have this place finally open that we had to go on opening night tonight. They had a long line of customers and ran out of big boba and small boba only 2 hours after they opened up at 6 pm. Our friend got the taro milk tea and complained about the powder floating at the top, and they replaced her drink with another flavor of her choosing. I had the mango black milk tea with strawberry popping boba and enjoyed it, though I didn't taste much mango flavor with the "normal" level of sweetness. We will definitely be back, and I hope they can iron out their service difficulties in the future. —LillianChow

2012-12-29 22:33:35   This place is a joke. I'm stuck here for winter break and it's nice to have a boba place in south davis, right? I came in three times and all the times were pretty...pointless. Not sure why I even gave it that many tries. First time I got a taro milk tea, which wasn't terrible, but wasn't great either. The second time I tried lychee drink (it was a dumb move, but almost all lychee drinks are bad) and got some fries. $5?? Really? For that I could get a meal at McD's or In-n-Out. Portions don't even justify the $5. They aren't even that special. 3rd time I went they ran out of boba..WTF, so it just went from a 'boba tea place' to a 'tea place'. Who runs out of boba only an hour into service? Don't think i'll be heading back. At this point, I rather make the drive to OTH or Quickleys to get my fix of asian drinks than walk across the street.

If you come here, PLEASE DON'T HAVE HIGH HOPES. =/

The one nice thing is the staff. They are at least friendly and helpful and when my drink was wrong, they offered to change it but with such a long time, i didn't want to bother them. —AppleSun

2013-01-01 14:20:32   Thank you for the honest reviews. To be honest, we were not ready for our opening. We had limited time to prepare, limited staff, and limited supplies. Call it a "soft opening" as most places do, as we tweak our recipes and try out different systems based on response. Please do not judge us entirely based on during this time. We've been fixing each issue as they come up based on the comments we've received so far, but we understand we have a long way to go to becoming the best. Although it will be difficult to appeal to everyone's taste, we will continue to improve until we do so. —TeaboCafe

2013-02-15 13:28:51   the drinks are good, but don't stand out. They use quality syrups thou, however the texture of the slushie / blizzards are off, it's almost like they are a bit thin. Perhaps the ice gets overzealously ground? I dunno... It's good it's just not mind blowing. Then again I used to work in a tap establishment so maybe my bar is set a whee bit high

Also they talk to non azn ppl without being condescending, which is a step up from the other places in town. —StevenDaubert

2013-02-23 21:34:32   Bad Teabo! Okay fine, you guys aren't officially open, but come on. You guys sitting inside just denied four customers in a Mercedes-Benz because you did such a lame job informing people that you'd be closed this evening by putting a piece of paper on the unlocked door scribbled upon with a pencil that you'd be closed this evening. Nothing else. Hello? Internet? Heck, just put something on this page that says you'll be closed. —DavidBarnum

2013-03-06 15:06:15   I've been here twice, and I've enjoyed my drink both times. I had the monthly special of strawberries & creme w/ boba - real strawberries blended with heavy cream and ice; then a red bean blizzard w/ boba - sweet red beans blended in with milk/cream and ice. Delicious! Whatever issues they had must have been ironed out b/c I've always had a pleasant experience. I'm hoping they'll have a bigger snack menu eventually. Fries and more fries and more fries and some chicken - not really appealing for me. The drinks though are A+! They also accept credit card w/ no minimum charge which is wonderful! I can't stand places that take cash only - I mean, when do we ever carry around cash these days?—j0liefllle

2013-04-04 00:21:30   What is the point in refusing customers that already ordered because YOUR system is suddenly down even though you already made the drink and it's sitting on the counter? There is no point and you'll definitely lose customers. You're losing money if you give us the drinks or not because they're already made and can't be used. Why purposely upset a customer?

Luckily when the owner left the employee gave the drinks to us and said we could pay for it when the system started working. Which we did. The owner apparently thought we were some criminals who were just going to walk out without paying. I wonder if the owner would have taken the drinks out of our hands if we had grabbed them while he was watching.

Thank you employee! Not going to name because I don't want her to get in trouble. —hoobooloo814

2013-07-28 02:58:20   I created this account just to write a review on Teabo. I ordered a large green milk tea with regular boba which came out to be 4.00—a bargain. I got my drink with high expectations as everybody in South Davis was raving about the drinks here. My milk tea had sour milk in it. The whole drink was ruined and straight up tasted like I was drinking pure rotten milk. I threw the drink away after only a couple sips and was extremely disappointed. Otherwise, Teabo is a great place to hang out for college students—it seems like the place to be in South Davis. However, I can't vouch for the drinks just yet. I hope the next time I visit the employees won't use rotten milk to serve the customers. —TiffanyC

2013-08-31 20:47:44   I'm not sure what these other snobs/ regular whiners above are talking about, (Just because you drive a Mercedes doesn't mean a business needs to open for YOU). I am a regular here and have never had spoiled milk, never had bad food, never had a lack of skewers for my chicken, or straws for my drinks, and never had bad customer service. They actually offer Soy milk, and almond milk instead of regular milk which for those of us who are dairy conscious is a blessing compared to any other tapioca place. They have a few cute employee's too =) Plus the 2 am closing time rocks! My only recommendation is they get WiFi. —doctoroboto

2013-11-08 14:18:44   I hope I didn't imply that because they (it wasn't me, like you so awesomely want to imply) drove a luxury car that they should have been helped. Had they been driving a Yugo, Teabo would have still denied them service and they still would have done a lame job informing the public of the closure. —DavidBarnum

2014-01-16 23:59:52   Their mascot, the panda, is named Tim Teabo...lol. Clever, I like it. Anyways, I've been here a few times for milk tea, and I gotta say, I'm sold on their claim of having higher quality and better boba than other places in Davis. I'm no connoisseur when it comes to boba, though, and am just basing my view on the taste. So if Teabo could expand and explain more about their quality, that'd be great. For example, is the tea brewed in store daily, and just how natural are the flavors? —TheShah

2014-02-13 02:38:34   I just went and got the Honey Green Tea with chia seeds and a Red Bean Blizzard for my friend. Studying late night and struck with a sudden craving for tea, it was a blessing to find this place at 1:30am! Both drinks were delicious though the blizzard was more watery than I'm used to. Still, the taste was good enough to ignore the texture! I guess if you think about it, blending the blizzard that thoroughly makes it easier to sip and swallow. I didn't know that the kitchen closed at 1am (edited the page now) so I couldn't try the popcorn chicken. :/ But I'm definitely coming back in the future, even if I live in North Davis! You guys should open another Teabo up North!! —CharlieMoon

2014-09-21 22:00:08   This place is adorable and I am enamoured. Accommodating staff, delicious drinks, satisfying food. Showed up around 8pm on a summer Sunday (empty line). We placed our drink orders first and they were made behind the counter as we hemmed and hawed over food - I received my honey green tea with boba before the cashier even completed the transaction. The only downside to such speedy drink service was that our cups were quickly sucked dry waiting for the food to show up (apparently lots of food orders to be filled at that time of night!). Perhaps the moral is to buy large-size drinks next time.

The honey green tea with boba is refreshingly light (but not diluted in flavour) and sweet - great for a warm evening. The vanilla milk tea with boba was heavier (not unpleasantly so) and sweeter - great as a go-to boba fix. Our food probably took ~20 minutes to arrive (as guessed by the music videos that passed by), but was well worth the wait. Order the popcorn chicken. It is unlike any popcorn chicken(/gristle/skin) you've ever popped in your mouth before. Popcorn chicken, made with actual chicken? The revolution has arrived. We mowed it down.

We'd ordered sweet potato fries, but the order was confused for normal potato fries. No mega-tragic matter. They were still tasty.

Totally coming back, if I can ever justify the drive from West Davis down to South Davis.

ETA: Made the purchase with a credit card and just checked my email for the receipt - instead of a physical stamp card, they track your purchases with credit card usage! This is neat. —JaniceW