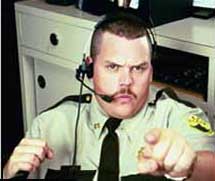 The best team in airsoft on the Davis scene. Inspired by the famous Farva from "Super Troopers". Team Ramrod has sort of fallen apart, however i have still tried hard to keep up a smaller version of Ramrod. but we are on the rise again. a new shipment of guns has reached our teammates. In the next games there will be a larger group of the original members playing and kicking ass.

Our team consists of people from Davis Senior High School.

Team Ramrod was formed on October 28, 2005; we formed up as an answer to the newly formed Team Breakfast. We then played three rounds at Rainbow City; at the beginning of the fourth round we saw people walking towards us with flashlights. When they got closer, it turns out that they were police officers, with their guns drawn, coming towards us. Then they instructed us to put our guns down and get in a line with our hands on our heads. Then three more cops came up from behind us. It was quite scary. They let us go with a warning not to play there anymore.

Kiel, Andrew, Josh, John, and I (Colin) have a previous history together. In fifth grade, John, Andrew, and I knew each other and we all hated Kiel. We hated him through 7th grade then we started becoming more and more friends. now in 12th grade, we all are friends devoted to shooting up each other and my little brother's Taylor "Pancakes" Clark airsoft team.

We also have a habit of doing stupid, but fun, things together. the most memorable thing is the mattress surfing incident. When 4 teenagers, who have way too much time on their hands and cars, find some free mattresses, chaos is sure to ensue. We got some rope, and tied the mattresses to the back of the car, then we proceeded to drive around the block while one of us was riding on the mattress. It was really fun, until we got caught and my friend got grounded for a month. Also, this event caused my friend's mom to say to him "Don't get involved in any of Colin's schemes."

1. Steve- "Colin, You are a fucking terrible strategist, Josh, come over here with me" Josh- "hahaha fuck you dude!"

Team Ramrod does not condone the sticking, inserting, ramming, forcing, or pounding of anything into one's rectum. However, we do condone the shooting of other teenagers in the name of good old fun.