There are three Telescreens in the main Memorial Union/ASUCD Coffee House areas. One is operated by the UC Davis Bookstore, one by Campus Unions and one by ASUCD in the CoHo. 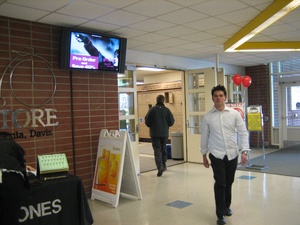 This telescreen analyzes consumer preferences and displays advertisements to help boost bookstore sales The bookstore telescreen shows mainly bookstore-related advertisements. The power button is accessible to someone who is 5'10" and it is fed by a VGA cable. 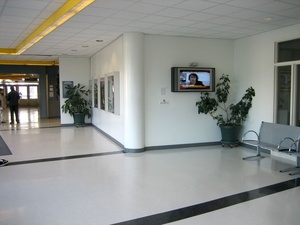 Campus Unions installed a lockout over the plug for their telescreen in the Memorial Union after getting tired of having their Telescreen unplugged on a daily basis. The Telescreen can still be turned off by pressing the easily accessible and well labeled power button. The campus unions telescreen shows advertisements from The University Network, or TUN Advertising. TUN features a photo of the the MU telescreen on their website. From their website: 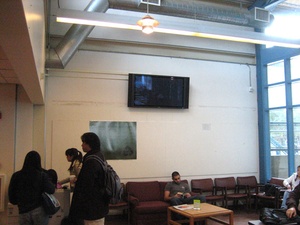 The newly installed (Photo taken 2007-2-21) telescreen watches students eat in the Coffee House. On February 3, 2005 the ASUCD Senate passed a bill allocating $33,000 to Creative Media for the purchase of two large flat-panel TV screens to be placed in the Memorial Union. The purchase was largely at the request of AGTV, which wanted to show its programming on the screens as well as display ads.

This advertisement-tv-screen bill caused uproar in the student community, and many complained about the purchase and the fact it would doubtlessly be annoying. It also sparked interest in the lack of open government processes in ASUCD, and provided some rage for the creation of the Friends Urging Campus Kindness slate.

The $33,000 ASUCD telescreen ended up in the east end of the Coffee House dining area, hanging above the "lounge" area where there is a couch, a coffee table and some semi-comfortable chairs. 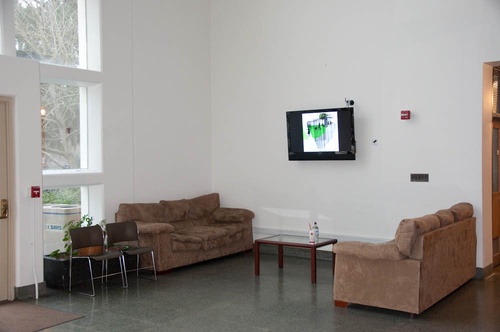 This telescreen was found in the lobby of Hunt Hall. Yes, that camera above the telescreen is watching you.