Tercero South seen from the Parking Lot to the south of the residence halls. Opened in fall 2005, Tercero South is a $26 million dollar facility; the first class to live there was the incoming freshman class of 2009 during the 2005-2006 school year. Buildings 1 and 2 are now named Patricia

For 2007-2008 about half of Tercero South is tripled. Everyone in a triple elected to be. All triples are fully furnished with 3 wardrobes. 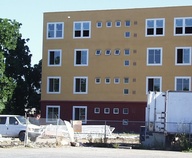 The Tercero South Residence Halls were built on the site of the former Tercero IM Field. The construction was easily noticed by residents in the nearby Tercero B Building. Upon completion, Tercero South became the most fragrant of all UCD residence halls due to its close proximity to cows.

The new buildings were completed by September 2005. They hold 400 students in double occupancy clusters similar to the "infills" at Segundo North. The buildings are equipped with elevators and stairs to allow easy access to to each of the four stories in each building. Each floor consists of 7 clusters along with its own lounge located next to the resident advisor's room. Each cluster has a shared bathroom to match that particular group of rooms. Laundry facilities and cooking facilities are located on the ground floor.

Beginning in March 2012, the Pierce Hall and Thille Hall were demolished to make way for seven new buildings. Demolition began in March 2012 and is expected to continue until June 2012. Construction will begin in July 2012, and the new residence halls are expected to open in August 2014.

I walked around these dorms at the beginning of the quarter and they seem huge. The hallways are much wider and the rooms seem more spacious. The freshmen are living pretty here. BenWebber