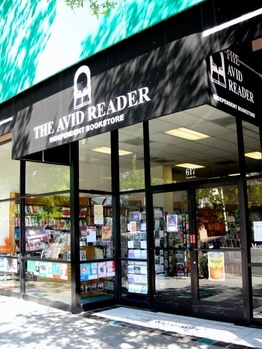 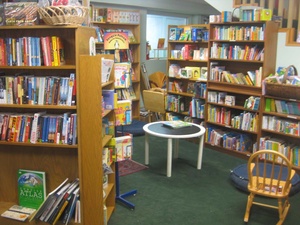 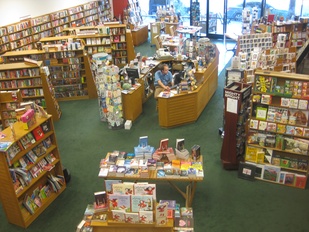 The Avid Reader is one of the long-standing independent bookstores in Davis. They have a decent selection and the staff is always friendly. They are pretty much the only Davis book store to host local and touring authors for public readings. Check their event web page or their Davis Enterprise ad. They also have The Avid Reader Book Club. Free gift wrapping is available year round.

As of June 2011, Google eBooks can be purchased from The Avid Reader website, allowing one to support their local bookstore while retaining the convenience of an e-book. According to this news story, Google is offering this service to independent bookstores for free, hoping that customers will become loyal to Google eBooks.

In March 2006, owner Alzada Knickerbocker was named state Small-Business Champion of the Year by the National Federation of Independent Business. The Avid Reader underwent a remodel in 2009.

The Avid Reader also has a sister store in Sacramento.

This place gets a big 'meh' from me. The selection is too small and the prices are too high. — Eyaddarras

2006-07-27 12:46:25   The Avid Reader holds awards for best bookstore, best customer service, and best independent retailer. Services include overnight special ordering (with free shipping), online ordering at www.avidreaderbooks.com, and fast searches for used, difficult to obtain, and out of print books. Teachers receive a 20% discount for classroom orders. Bookclub groups are welcome and receive a 20% discount on their bookclub selections. The store hosts its own bookclub that meets monthly and is always open to new members. Its Children’s Book Loft is a popular destination for young readers. There are signups for American Girls Bookclub meetings held regularly in the Loft. The store is recognized for a staff that is fast, friendly and knowledgeable, an extensive book selection including the best in print for the readers of Davis, strong support of local authors that includes dozens of booksignings annually, contributions to local organizations, and sponsorships of community programs. —TheAvidReader

2006-07-27 12:47:22   If they don't have what I want in stock, they can get it for me fairly fast. They also put on the Harry Potter nights over the last few book releases. Great community participation! Good store to support. —SharlaDaly

2006-08-23 10:37:14   Today the Sacramento Bee featured an article that quoted Alzada Knickerbocker as being opposing to the minimum wage increase. Sort of surprising seeing as I would expect the Avid Reader to pay better in Davis where the cost of living is much higher. Guess it goes to show you can't always judge a book by its cover. —EnirytManaen

2007-05-16 04:41:58   Interesting to read the comment above — I believe it. I went for a job interview once and met the owner. She appeared to be quite full of herself and kept focusing on how everyone tells her how great her bookstore was instead of doing my interview. Anyhow I ended with a better job offer elsewhere, but...ugh...youre better off going to any other of the many bookstores in Davis since this one has a lousy selection and is way overpriced. —christinegallo

2007-12-14 00:11:34   I'm glad we still have an independent bookstore downtown, but I wish I could be more enthusiastic about this one. One of my biggest gripes is the dog upstairs. Why is a dog that is freaked out by children kept right next to the children's section? They would sell more books if they found another daytime accommodation for this poor dog. I take my children's book business to Borders—it's bigger, cheaper, and my children can go to the kids' section without being scared out of their wits. I'm no dog-hater. (Pomegranate, the hair place on F St., has a lovely, lovely dog who belongs to the owners.) This is one instance of the sort of lack of sense about customer needs that eventually leads to loss of business & business closure, which then gets blamed (unfairly, IMHO) on Borders and Amazon. I wish someone who really loved both books & people would open a bookstore here! —PrimulaBaggins

2007-12-14 22:28:19   Best selection of books in Davis. Excellent staff and their special order system is fast and efficient. Many books by local authors. Lots of great calendars around the holidays, good map selection. They have normal retail pricing, discounts on some books and a shopper card you can use to save money. BTW, every time I've been in the store, which is many, many times over the years, the dog has been confined behind the child gate upstairs, and is usually curled up in her corner or in her carrier. The owner is very active in downtown events and is a big supporter of local community groups. —DonShor

2009-07-01 15:25:26   It's a little bit surprising, since the store is physically much smaller, but the variety of books offered by Avid is probably comparable to that of Borders. Borders shelves are (increasingly) occupied by empty space, books on display sideways, and signs telling you to look at other books. Avid's shelves are densely packed with one of just about everything. While I'm sure they don't have the diversity of Amazon, I've been in there on a number of occasions, and always found what what I was looking for. Highly recommended.

One concern though - I think I mentioned this on the Borders page as well at one point - it is becoming increasingly difficult to find novels in trade paperback format. Books that should cost $7 or so cost $16 or more, and don't seem to be available in less expensive formats. At those prices, it often feels like a better choice to try to find books at the library, to exchange books with friends, or to seek other alternatives (including Amazon, which is often somewhat cheaper). I'd rather support my local bookstores if I can, but if prices continue to increase, that may not be an option. —IDoNotExist

2009-07-20 01:01:50   What kind of renovations are being performed? It looked like some pretty extensive changes were being made when I biked by. —IDoNotExist

2009-07-31 10:54:07   Well, for the most part, the changes are done, but there are still a few more things happening. Over the last two weeks, we have added wheels to all the bookshelves so we can move them around on whim, changed the carpets, repainted the walls, redid the tile in the front of the store (inside and out), refinished the wooden surfaces, redid the staircase that leads to the kids' loft and have been doing minor changes to the store arrangement overall. Suffice to say, me and the other employees are physically tired, but there are still more changes to come. Come on by and check it out. —SunjeetBaadkar

2009-08-29 22:03:03   I love the Avid Reader. The selection is excellent, the atmosphere inviting and relaxing, the staff are excellent, and they are involved in and supportive of the local community. Where else can you go that the staff keep you in mind when new books come in that you might be interested in and let you know? Definitely one of my very favorite places in Davis. —davisdebbie

2009-09-04 20:45:06   The bulletin board is back up! To accommodate the demand, we've more than doubled the size of it and moved it to the back hallway since that area gets more foot traffic than the front corner did. Please tell the employees before posting something so that it is guaranteed to stay up (as things just randomly posted may be pulled down). —SunjeetBaadkar

2010-04-14 08:50:05   I do not recommend this store to parents with small children. I tried to take my young children upstairs to the kids section. Unfortunately, the owner keeps a large, aggressive dog in an area upstairs right next to the kid's section. The dog lunged, snapped and growled at my kids and left them crying and cowering. When I inquired with the people that work there they reacted with indifference. I haven't been back since. —sys$hobbit

2010-06-29 11:48:20   That dog scared once when I was getting a book upstairs. I was terrified, but the book select at the Avid Reader is pretty good and it is a local buisness so you know money spent there will go back to the community. —BryceH

2011-05-10 09:55:45   I don't know about the traumatized dog, but I do know that I was in the store once and overheard the owner talking loudly on the phone about the necessity of sending more donations to Michelle Bachmann (yes, that Michelle "the census is a communist plot and we have a communist president and the activist judges are turning our children into homosexual muslims" Bachmann). I'll admit that since then I've been torn between wanting my consumer dollars to stay in Davis and wanting my consumer dollars to stay out of the Tea Party coffers. —Swilltopower

2011-05-21 22:31:26   I adore the selection of books at the Avid Reader. I thoroughly enjoying browsing in the peaceful environment in the middle of a crazy day. —JennyAnnMcAllister

2011-05-28 15:59:55   It's kind of a cool little store, seems to have a decent selection. Only thing is I am a college student and can't afford to pay list price for books right now, so I like to browse the store, then buy the books on Amazon. I would love to support a local business, provided the owner doesn't contribute money to Michelle Bachmann, as another reviewer stated - perhaps when I grow up and get a job. —stevohfun

2011-07-13 10:12:45   I love the Avid Reader and always prefer it to chain bookstores. The staff is nice and I always like the selection of books they put right in the front of the store because it has a variety of genres I wouldn't normally look at. I have bought and enjoyed several of these "random" books. If you ask for suggestions the staff is helpful. Support local business and go to the Avid Reader! —LenaSchiffer

2012-01-23 17:45:00   It seems like a nice store. The store had the series of books I was looking for but not the actual books in the series I needed. I will probably give it another try if I need other books in the future. —LoriOrf

2012-07-03 10:40:00   Re: earlier comments about the owner supporting Michelle Bachmann, a quick internet search reveals that she is a significant donor to the Republican Party. See http://fundrace.huffingtonpost.com/neighbors.php?type=name&lname=Knickerbocker.

2013-06-24 20:09:31   I like the selection of books at both of the Avid Reader Bookstores however, I have not found the staff there to be particularly friendly. I have bought books on numerous occasions and I am amazed at how unfriendly the cashiers are. They seem annoyed to be disturbed from whatever it is they are doing to ring up a sale. Now mind you I am not intentionally interrupting them. I always wait until the Cashier asks if I am ready. Given the number of independent bookstores that have gone out of business over the year you would think the staff would be trained to be friendlier. Not that I expect to be buddies with the Cashier but I would prefer to be treated with the same level of politeness that should be given a stranger. —DebbieO'Neill