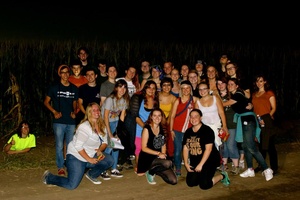 The Davis Alliance is a local chapter of the national 501c3 nonprofit, The Harry Potter Alliance (HPA). We have been inspired by Harry Potter to fight the Dark Arts in the real world, and work for human rights, equality, and a better world. We work hard to create a positive, fun, empowering and magical environment for all of our members and everyone we meet, and believe that fighting for what is right can also be ridiculously fun!

Meetings are held once a week, starting at 7PM on Thursdays, and are held in the room of requirement, (so-called because it changes every so often) For now it's tentatively Olson 147. For updates on meeting information check out our Facebook page!

Each meeting consists of general announcements, which are followed by the presentation of a 'discussion question' to begin a dialogue between participants, often based on current events or issues presented in the books: usually a combination of both of these.

The discussions are very casual, and everyone is encouraged to speak, if they wish to do so. Most importantly, we are here to have fun!

Some of the things we have done as a club outside weekly meetings:

The Davis Alliance accepts everyone!

We are predominantly composed of undergraduate students, but our members can be:

Everyone is encouraged to come to a meeting, and they are considered to be open to the public. You don't even have to be a huge Harry Potter nerd (though it certainly helps!). Members are free to choose their own houses, and we do have house competitions.

Paying dues, which is not a requirement to come to meetings, ($5 per quarter) are turned in to the current treasurer & Head of Ravenclaw, Katie Mignola. Becoming a member places you on the official house list, which enables you to earn House Points when participating in club activities! At the end of the year, we award prizes to the victorious house. The membership fee also helps pay for club expenses for our various club projects and charity projects, like Accio Books and our Valentines.

We try to make a difference on both a local as well as a global scale. We are open to new ideas, so if you have one, please come to a meeting and share it!

History of the Davis Alliance:

The national organization was founded in 2005 by Andrew Slack and Paul DeGeorge (from the Famous Wizard Rock band, Harry and the Potters). Since then, it has grown and the members have campaigned against social injustice in all its forms, from the crisis in Darfur to helping Haiti heal.

The Davis Alliance was formed in January 2011. We have already grown quite a bit, and hope to grow even more, and hope to continue making a difference! Every year we look for new exciting activities to help others.

Even if you cannot make the meetings, you can still be an active member of the club, or even a casual observer! To follow the club's activities, you can join the orgsync or Facebook, or ask to be put on the group email listserv! As a general rule, the Facebook group is much more active, and much more social. Additionally, you can follow the National Harry Potter Alliance, which has a very strong online presence. We make sure to tell people at 7:50PM in case they wish to catch a bus.