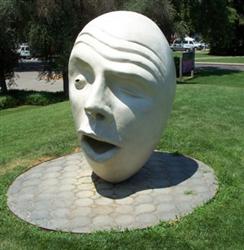 The Eggheads are one of several public Campus Art pieces. Commissioned from Robert Arneson in 1989, The Egghead Series is one of the most memorable parts of the Davis campus. 7 of these white, smooth eggheads are scattered about the campus. 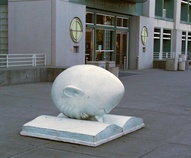 In 2007, the campus held a digital photo contest featuring the Eggheads as the subject matter. Many of the entries displayed a sense of humor and the great affection that the campus community has for these sculptures.

The Eggheads were the subject matter for the 2007/2008 school year California Aggie Comic "Eggheadz."

Robert Arneson taught at Davis from 1962 until 1991, when he retired. He completed the series shortly before his death in 1992. An interesting fact is that Arneson always wanted the Eggheads to be an intimate part of campus life, and asked that the University never compromise intimate and playful interaction with his sculptures.

Aggie article on the sculptures

2010-01-30 21:46:25   There are a number of self portraits of Robert Arneson around Shields Library, or at least there used to be. There is a very strong resemblance between Arneson and the eggheads. In fact, he appears to be the model for the faces in all of the work that I've seen by him. —IDoNotExist