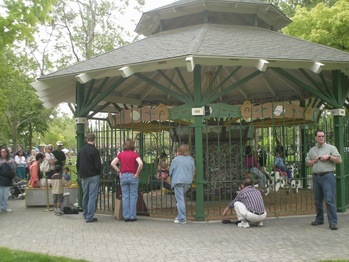 The carousel during Farmer's Market in April 2007. Note the seated man in orange pedal-powering the carousel.

The Flying Carousel of the Delta Breeze is located in the northern half of Central Park. The Carousel is human-powered as the operator sits in a recumbent bicycle seat and pedals to make it rotate. Apparently the resulting breeze reminds some people of the Delta Breeze.

It is operated by Davis Joint Unified School District organizations as a way to raise money. Rides are offered during the Farmer's Market and during Picnic in the Park. The cost is a dollar to ride and all the proceeds go to a great cause: the Davis Schools. It is one of the attractions that make Central Park and the Farmer's Market a fun place to take kids.

The merry-go-round opened to the public in late 1995. It was created as a collaborative effort between William Dentzel, a fifth-generation carousel-maker, the community, and local schoolchildren.

The hand-carved carousel animals have been a target of thieves several times. Seymour the Seal was stolen in 2004 and was replaced the next year at a cost of $5,000. Harriet the Rabbit was taken in 2006 and has not been recovered or replaced as of April 2007. 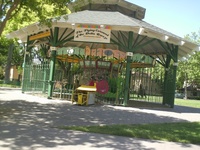 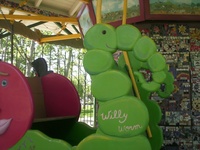 Willy the Worm and Terri the Tomato 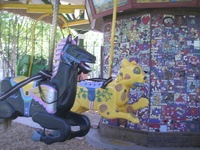 Pegasus the Horse and Silvie the Cat 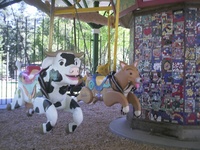 Daisy the Cow and Bob the Dog 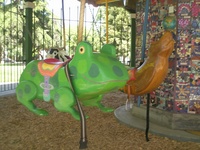 Frederick the Frog and Seymour the Seal 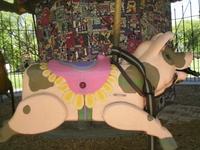 2010-07-06 19:03:01   ?? Who would steal animals from the carousel ?? - that is so lame. I noticed that there was an empty spot on the carousel, and from the placard saw that Harriet the Rabbit was missing. Is there any way to start a collection to get Harriet replaced? I'm sure that it wouldn't take long to gather $5K (e.g., have a collection box at the carousel when it is operating?) Anyone have any input on who specifically manages the carousel? —markspiller