This entry is about the intra-Davis Greenbelt of parks and bike paths. For the conservation buffer zones around the city, see the entries for the Davis-Dixon Greenbelt and the Vacaville-Dixon Greenbelt. 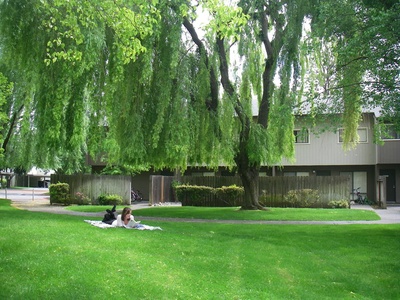 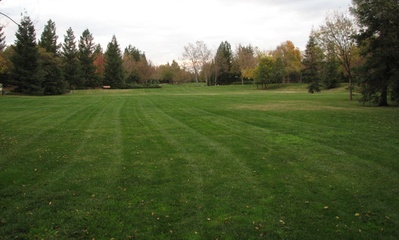 Although composed of more than ten distinct yet interconnecting greenbelts, The Greenbelt refers to the nearly continuous stretch of parks and bike paths that stretch across north, south, east, and west Davis. There are more than sixty miles of greenbelt in a town of merely ten square miles. Along with the Arboretum, the greenbelt offers many pleasant places to walk or run or ride your bike. The green belt incorporates many bike bridges and bike tunnels as well. Kids also use the greenbelt to bike to school. You'll also see Davis' many youth soccer teams practicing in the greenbelt's larger spaces.

It's pretty easy to get lost in the greenbelt. Bring a map or, when you inevitably get lost, find an adjoining streets and follow the cars until they lead you back to civilization. As such, the City of Davis provides a bike map that shows the greenbelts in all of their interconnecting glory. The Davis Bike Loop runs through various parts of the Greenbelt and shows off the varied bike infrastructure in our town.

The greenbelt differs from open spaces, the latter of which are neither developed nor devoted to recreation. 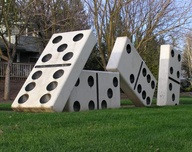 2008-06-07 12:44:19   I wish I could remember my favorite spot along the greenbelt, but the truth is that I found it by getting lost in it. By the time I figured my way out, I couldn't remember how to get back to it. The most memorable part was that, while lost, I asked someone I ran into for directions out and she couldn't help me cause she was lost also. —SunjeetBaadkar

2008-06-18 17:43:47   The stretch through village homes between Russle and Arlington, and the Wildhorse environmental buffer are both great. —jefftolentino

2010-06-07 09:22:45   FYI, there are signs posted all over the North Davis Greenbelt that describe areas that may be designated to allow unleashed dogs, but under verbal control. There is a meeting on June 17. More information at http://cityofdavis.org/pgs/press-releases/repository/2010-05-27.cfm and there is a link to a map of those areas at the bottom of that page. —RyanMikulovsky

2011-01-12 06:19:18   I actually grew up learning to bike on the greenbelts in East Davis, but now that I live in North I actually find I prefer the setup of the greenbelts on this end. I love taking the household dog Ronin (a rather large puppy, I might add) out when I can't sleep, which is quite often. If you happen to see a shady figure walking around 3 or 4AM with a distinctly wolfish dog in tow, it's probably me. And yes, you should be worried. —KBathory