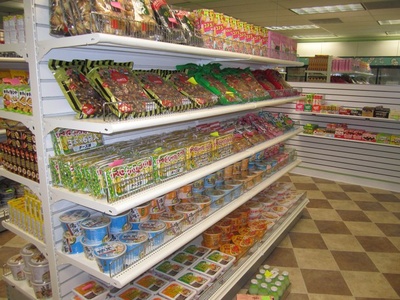 The Inconvenient Store is Davis' newest Asian shop opened by two recent UC Davis alumni, similar to Kim's Mart but with a focus on snacks and sweets at great prices! If you can't find what you want, you can try to request it on the store's Facebook page.

"From their Facebook page:" "We are a little Asian snack store, whose goal is to offer you and your college lifestyle a munchie stop fitting of any scenario. Before class, study break, before the party, ANYTHING!

We will fight together the torture of late night cravings."

Protip: Sometimes they post discounts and such on their Facebook page, so be sure to check it before you visit!

NOTE: According to their Facebook page they are closing at the end of this week (Friday 8/30/2013) because of a lease renewal that didn't go well. :(

Himalaya Gifts was previously at this location, and prior to that, there was Icon Tattoo. 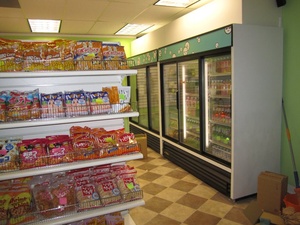 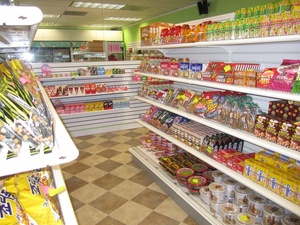 I'm sold on the name of the establishment alone —StevenDaubert

2011-03-15 11:20:53   The space is very small. I guess I was expecting more because the mirrors had me fooled into thinking the store was bigger. I expected to see a variety of Asian things from soy sauce, curry mixes, frozen delights, etc but they only have snacks, sweets, ramen, and drinks. So don't come into the store thinking this place has more than that. I noticed some of their prices are higher than Kim's Mart which is just in downtown Davis near Chase. So I'll save myself the trip and money and go to Kim's Mart instead. —Kenny0427

2011-03-15 14:51:19   I noticed that the drink prices were a bit more expensive than Kim's mart too, but then I realized that the CRV is included in the price as well; so it seems like they're all around the same price. —Bitcheshateme

2011-03-16 13:19:34   I love just looking at all of the products! The owners are very nice, and have offered me free samples of the scarier snacks, and also said that they will look into recommendations for stock. I will probably end up frequenting this place much more than is healthy. —ThomasReeder

2011-03-19 03:18:40   I was super excited to stop by here the other day after seeing it on Facebook, and while the place is a bit small, it has everything I want (Calpico, Ramune, Pocky,Kasugai gummies, Shrimp chips) and even stuff I've never seen (which is saying something because I grew up in San Jose with lots of Asian grocery stores/snacks). I came out with some awesome green apple mints that I've never seen before but tasted great which made me pretty happy. Yes, the prices are a little expensive compared to Bay Area prices (but not by a lot!), and about the same as Kim's Mart. It's actually very appropriately priced considering that this is Davis. But what really got me was how genuinely nice the guys who run this store are! This place will definitely get my business over Kim's Mart for that reason alone. —JennPham

2011-03-28 14:19:24   Despite being a small store, the Inconvenient Store provides a decent selection of snacks at what I would consider normal prices. Personally, I hate having to drive to Sac to get snacks and stuff, so it's nice to have something in town, and especially something close to campus. —Morganna

2011-06-01 19:15:21   Pretty friendly customer service. It may be small but its loaded with a great variety of pretty popular Asian snack brands. Its good to hear that they're eager to expand and keep adding more to their selection. Great hours. I hope they're here to stay! —MelannieLavarias

2011-06-26 22:32:46   yo where were you guys tonight? me and my friend dropped by around 945 and the doors were locked with no one inside. the lights were on and the sign said open still though. while we were there two more potential customers came by to be disappointed as well. —benjaminplonchkiercken

2011-07-19 23:23:29   the first 3 times i went, they were closed during their posted hours such as the day after picnic day, one random sunday, and another but nonetheless, i like it cause the workers are funny. hahaha —SallyVo

2011-07-21 20:55:53   I can't recommend this place enough. The service is good and it's open late. The small space is well-utilized with a good variety of products, some of which surprised me! —ScottMeehleib

But its pricey compared to Ranch 99 or other Asian stores in nearby cities. Not bad for Davis though. —PaulV

2011-12-21 21:57:16   This is such a clever store— Asian snacks that are otherwise inconvenient to find. I really hope these guys become wildly successful and open a million of these stores. —ActionFigureBarbie

2012-04-09 22:59:44   Awesome place! Great customer service too. Hard working and catering to the students! I really hope they are here to stay so that I can blow a lot of my wages here :) —MelannieLavarias

2013-05-05 13:59:05   This place is amazing. They have a large variety of snacks, which is awesome for me. The guy who was there today was really friendly and I had a nice conversation with him. The prices were great, especially since it meant I wouldn't have to drive up to Sacramento. I even got a free item to apologize for not being open the other day, which was really, really nice and completely made my day (it was a melon ice, which are delicious and I'm buying one next time). I'm definitely coming back here again and I hope their business continues to do well and grow. —HeatherNicholoff