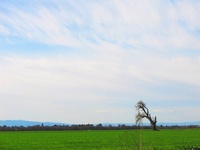 The jagged tree is plainly visible in this undated satellite image.

The Jagged Tree, known by many names (such as "Witch Tree," "Covell Tree,"1 and "Suicide Tree"2 after its death), was an iconic Valley Oak tree in a field at the corner of Pole Line Road and East Covell Boulevard. On Friday, Jan 6th 2006, the tree fell down after a period of very heavy rains. Now, only the stump remains.

The tree assumed the unusual position of being an icon of the potential Covell Village development. Those who opposed Measure X used images of the tree in their literature and yard posters. Likewise, in a brochure circulated by the pro-Measure X organization, it was said that the tree would be in the center of the main park for the community if Measure X passed, and Mike Corbett was quoted as saying, "The jagged tree will be saved and a circular park will be built around it just north of the projects village center."

Several people have ventured out to the tree on drunken evening so the loss of this tree would definitely mean one less drunken thing to do.

There were articles in the Davis Enterprise (via Newsbank) and Sacramento Bee (registration required & beware of pop-ups) that covered the death of the tree. I think Ruth Williams, the executive director of Tree Davis, wrote a letter to the Davis Enterprise about this that put the issue in a very useful perspective.

The Tree In Repose 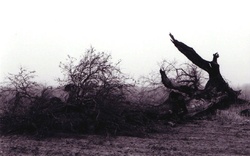 Reposing for a picture

Comments (Before the Fall)

If the tree were going to be cut down due to the new development, KenjiYamada says, "This tree alone is enough to convince me to oppose Covell Village."

I love this tree and take pictures of it all the time! (I live near it—I don't go miles out of my way, haha). Is this one of my pics? The little birdie at the top of the tree tells me it might be! :) — ss

This is my favorite tree in Davis! I'm so glad that someone finally made a page for it, because I was too lazy to do so. - TerraSmithers

I can see this tree from my driveway!! It was absolutely one of the many (positive) factors in the decision of renting the house I have. Me and my roomates await the day that at sunset we will see a hanging body from it, because it is THAT kind of tree. We also might venture there at night and do a seance or use an Ouija Board...BEST TREE EVAR! - AndreHarris

I pass by this tree every day on the way to and from work. It has so much character, especially when there's a great sunset behind it. I would be immensely sad if it were ever to disappear. -AlexPomeranz

It's the aerobics tree! It's stretching. - LauraCochrane

My favorite tree is similar, but it is the east most tree as you exit town heading west. It stands like a sentinel pointing east. Glorious example of singular arboreal bliss. — JabberWokky

This reminds me of a story I heard a few years ago. It seems there was just such a tree in the middle of a field in Ireland where a large auto-manufacturing factory was to be built. The locals said that if the tree were cut down, it would curse whatever replaced it and doom it to failure. The entrepreneur scoffed and had it cut down. His name was John DeLorean. —SteveDavison

Comments (After the Fall)

The tree is dead. Long live the tree. — JohnNapier

This has been my favorite tree in Davis ever since I first moved here in 1999; my friends and I always called it "the Blasted One." It looked so beautiful silhouetted against the sunset. I am very sad to hear of its passing. Blasted One, you will be missed. — BarnabasTruman

Now that this eyesore is gone, bring on Covell Village - ApolloStumpy

I agree. It was time for it to go. -NickSchmalenberger

Heh. Were I the property owner there would be some subtle land use changes to that field. Mostly involving chickens or turkeys. Then we'll see some action on development. - rocksanddirt

1. There is a Facebook group entitled I Love the Covell Tree.
2. Some feel this name to be misplaced. "Suicide Tree" could also be the name of the tree in the Arboretum from which someone hung himself.