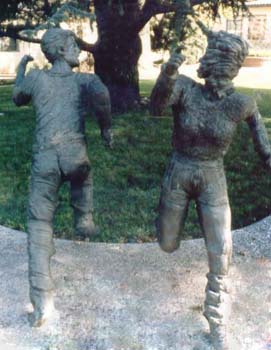 This statue was created by Tony Natsoulas in 1986.

Town folklore has it that some hapless passerby tripped and suffered some injury upon the up-raised finger of a running figure in this sculpture, but that never actually happened—people just worried that it would happen. Originally the sculpture was a few feet closer to the intersection of 3rd Street and F, but after heated debate over possible injury from the aforementioned finger, the sculpture was moved a few feet back to its present location.

This is located outside the Historic City Hall, which until recently housed the Davis Police Department (and previously, the Fire Department as well). At that time many dubbed this statuary art, "Oh shit, it's the cops." This building now houses Bistro 33. Maybe that statue will take on new significance. Ah, living art.

Modifications to the Work Sometimes the statues can be caught smoking while loitering... or maybe they're not since they're jogging? 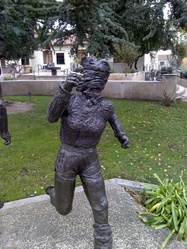 In early June 2009, a beehive and swarm of bees were left with the joggers, turning them into into runners. 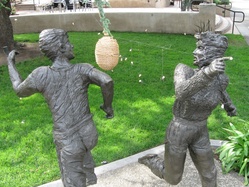 I quite agree. I only wish the city would pay me to make a better updated version of this.

* I don't mind the statue myself, though it's significance eludes me. Unless I hear otherwise, I'm inclined to go with the atomic bomb story. - EyadDarras

* Is it just me or is one of the "person's" head wretched around further than is humanly possible? Its sorta disturbing in a poltergeist sort of way... -SunjeetBaadkar

2012-11-11 23:36:09   Natsoulas donated a ceramic statue of a schoolboy to St. James when I was a student there in the 90s. I mean, I hope he donated it and they didn't commission it or something. It stood in the corner of the admin office, silently judging and damning all who entered. —LilyS