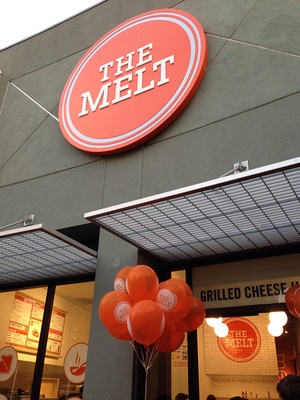 The Melt is a grilled cheese and soup restaurant (as noted by Wendy Wetzel). It fills the spot previously known as Ben & Jerry's.

The Melt has a simple menu, reminiscent of In-N-Out Burger. The food is prepared behind a protective glass screen in front of customers. When ordering at the future-modern looking white cash registers, they ask for your initials which are displayed alongside your order on a large screen in the upper right hand corner of the kitchen so you can see where you are in the order queue. If you order online, you pick up your order in store by scanning your digital receipt at the built in scanner to the right of the cash registers. Ordering online allows you to skip any lines and your order goes straight to the top of the order queue.

Students "will always" get a free soda by showing a student ID and purchasing a combo (grilled cheese + side of soup or salad). The soda is made with cane sugar rather than HFCS and comes in only three flavors: cola, rootbeer, & lemon-lime.

They have a fenced off exterior patio, opposite the path of Mikuni's patio, which more than doubles their available seating.

I got an informal confirmation today that they are continuing their training/soft-opening tomorrow (Nov. 8) for the dinner hour (5pm-8pm), which probably means free sandwiches again. —jefftolentino They gave away free grilled cheese on November 12th, a day before their grand opening. 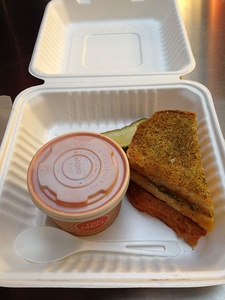 To go order with soup 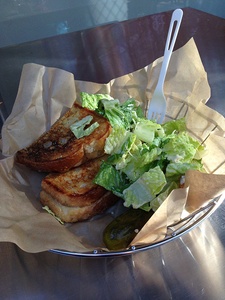 For here order with salad 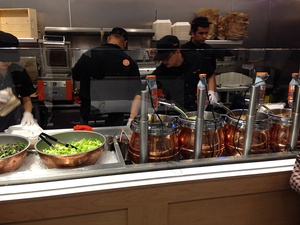 The Melt closed sometime in February or March 2015. The company dropped the price of grilled cheese by $1 and expanded its menu to include burgers, but the Davis location could not switch to the new menu given the terms of their lease (Habit Burger has an exclusivity clause for burgers in Davis Commons). Managers were said to be looking for a new location in town. That remains to be seen. 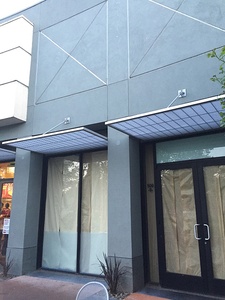 2013-11-06 13:17:25   Happened to catch them on thier staff training day, when they were giving away everything for free. Got an Italian Job with onions and bacon, with a green salad and a soda pop. The Italian was made with garlic bread, and was highly satisfing. The green salad was equally good, and included apples and goat cheese. The fact that it was free was a great incentive to try this place, but I will probably go back after they officially open and pay actually money for more. The menu shows sandwiches for about $5, with a combo option for an additional $2. —jefftolentino

2013-11-07 14:05:42   Came back today and got another free lunch. Got the Mac Daddy, which was basically a grilled cheese where the cheese was actually macaroni and cheese. I'll say that again. I got a grilled cheese were the cheese was actually macaroni and cheese. Yeah, basically the two most kick-ass comfort foods in one and it was fricking good. I got the smoked bacon added in to make it extra special. It was good and I'd get it again. On the down side they overdid it a little on the seasoning that they sprinkle on the outside of the bread. It was a lot, like more than reasonable. Plus it was a processed seasoning mix, and not super impressive. But it was free, so I wasn't too worried about it. I got a cesaer salad on the side that was typical fair. They had croutons that look like they were made from grilled cheese cubes which were visually interesting, but not much different from normal croutons taste-wise. Personlly I preferred the green salad with goat cheese and apples that I got yesterday. Moving on, I also ordered chips since everything was free, but they forgot them. It was also crowded, and again free, so I'm not going to complain too much. If it were something I'd paid for, I probably would have just asked for my chips and been done with it. Given all that, I'm rating these guys an 8/10. Its not 100% prime ingredients, but they do have some really good grilled cheese sandwiches and the Mac Daddy was pretty awesome. —jefftolentino

2013-12-09 14:13:07   Had lunch here today, and it was delicious! The Mission grilled cheese with tomato, spicy black bean soup, and a pickle for $6.95—a great price for a filling meal (+free beverage for UCD undergrads, grads, and staff). Definitely going back. —zombiek

2014-03-27 21:53:16   I went a few weeks ago when I was just getting over a cold, so I'd be open to try them again sometime. I had their jalapeno melt. It was pretty good. The italian soda was nice as well. I hope they stick around. They fit a unique niche in the dinning options in Davis. —CarlosOverstreet